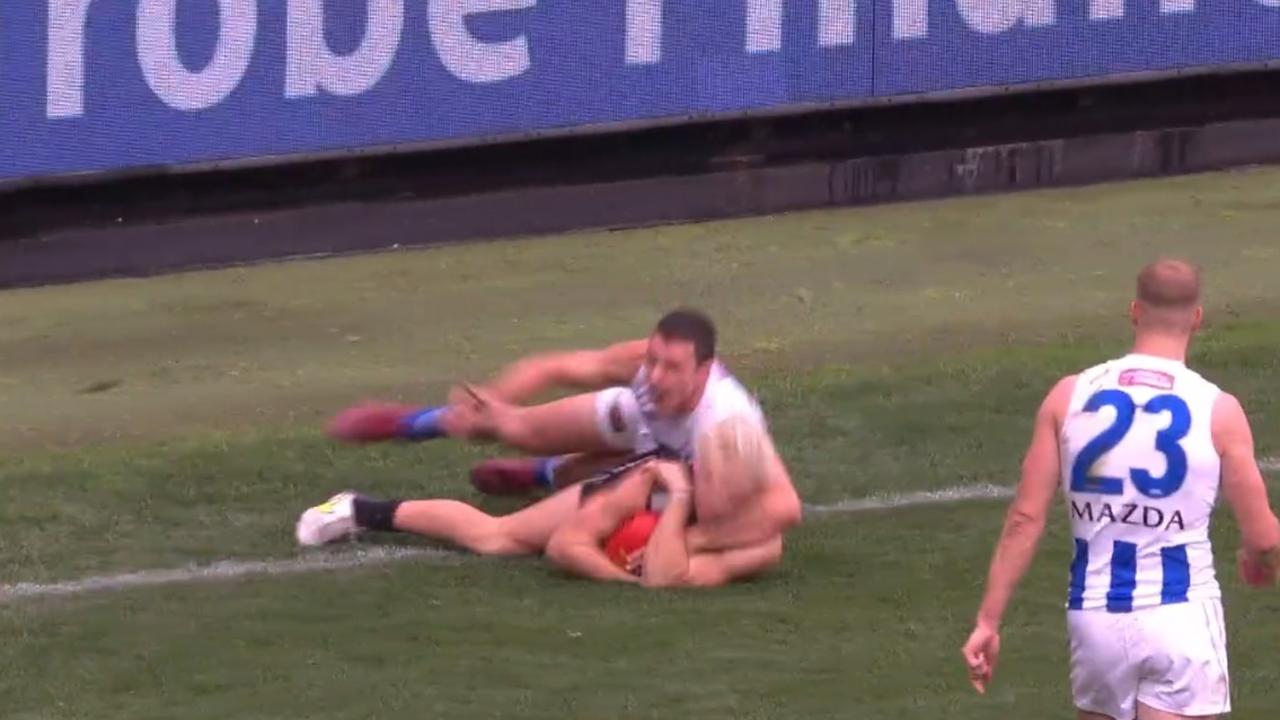 One of the AFL’s most controversial stars once again found himself at the center of another controversial moment on Saturday afternoon.

Jack Ginnivan has quickly become arguably the most controversial player in the league this season with his ability to take free kicks.

The Collingwood live striker drops low as opponents close in and more often than not finds himself with one arm wrapped around his neck.

Watch every AFL blockbuster game this weekend live and ad-free on Kayo. New to Kayo? Start your free trial now >

His tactics have divided legends of the game and left fans angry.

On Saturday afternoon, Ginnivan’s tactics were in the spotlight against North Melbourne when he tried to draw a free kick against North’s Luke Davies-Uniacke.

After a ball deep in the Collingwood front line, Ginnivan received the ball on the boundary line from Scott Pendlebury and tried to dance around Davies-Uniacke’s tackle.

Ginnivan fell low and Davies-Uniacke’s left arm ended up around striker Pies’ neck, but the referee said he slipped away and eventually whistled – scathing Ginnivan for holding the ball .

Fox Footy’s David King has weighed in on the divisive moment.

“That’s the one, you can hear the ref explain it and say ‘no, you ducked’ and that’s considered his first opportunity and he’s gone,” King said.

“He challenges the referee to make a call and then he can’t question the call. He gets as much as he gives, so I think it’s great officiating.

“If you look here he takes the free kick lowering his height now I think it’s a free kick personally I think there’s some skill in it but I’m glad the ref has saw that the other day.”

Former Hawthorn star Campbell Brown praised the referee as he called on players to dodge and milk free kicks.

“Exceptional refereeing. Players who deliberately lean into tackles do not deserve to be rewarded with a free kick. Really well judged,” Brown tweeted.

Brown was not the only one to praise the referees’ decision, with SEN’s Nic Negrepontis also putting his weight behind the appeal.

Of course, not everyone agreed with fans who also wondered why Ginnivan was being judged so harshly for doing what Geelong’s Joel Selwood has done since entering the league.

Fox Footy’s Jonathan Brown said he didn’t want players to be “encouraged” to drop their knees when taking a tackle in an attempt to win a free kick.

“It’s not so much in the spirit of the game, I don’t want the players to put their heads down,” he said.

“Referees are coached and advised during the game – they talk about things that are happening. They obviously would have been told at halftime that Ginnivan had done it multiple times in the first half. Be aware of this. »

Ginnivan was on fire early for Collingwood, but it was North Melbourne who stole the show at the MCG.

Putting the Magpies to the sword and looking like they were going to overflow the season in the first three quarters.