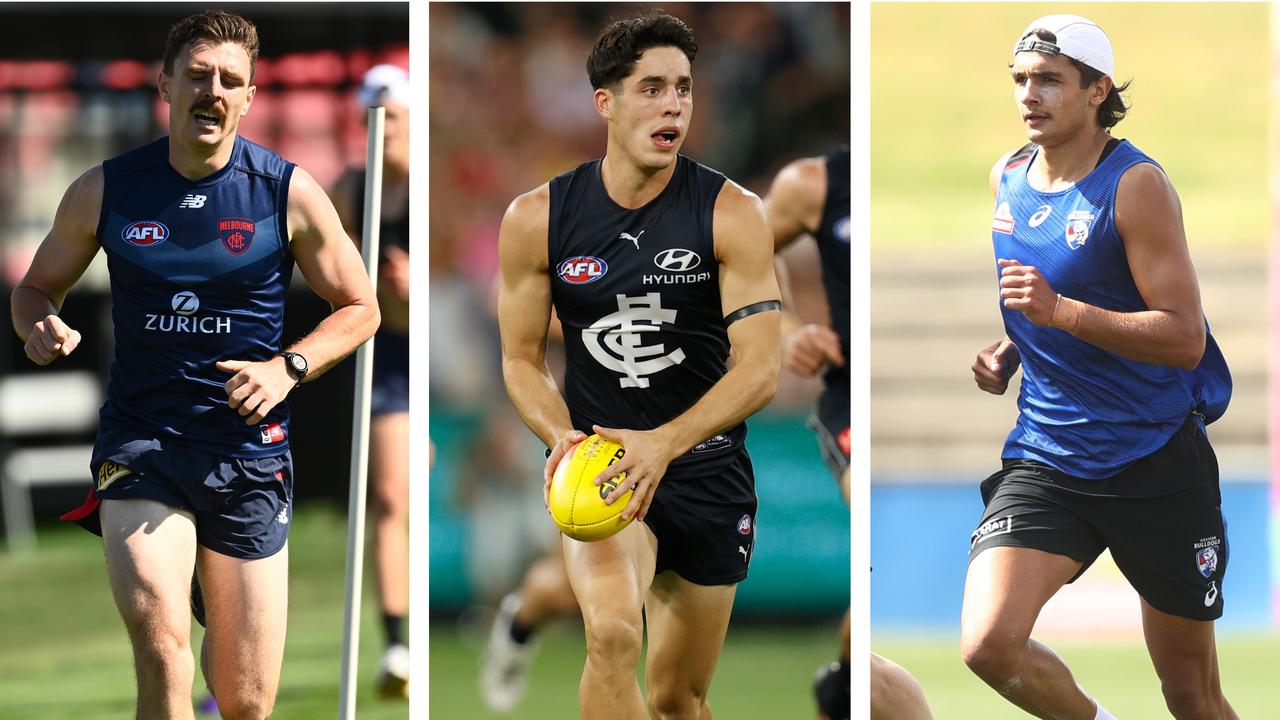 A second Carlton player will miss Thursday night’s clash against the Western Bulldogs after entering AFL health and safety protocols, but a shock inclusions looms.

Plus the Bulldogs could include their No. 1 draft pick in the starting line-up.

Get all the latest Round 2 selection news and updates in AFL Team Whispers!

CARLTON has been dealt a major blow ahead of its Thursday night clash against the Western Bulldogs, with prized recruit Adam Cerra ruled out.

Cerra has become the second Blues player to enter the AFL’s health and safety protocols and, like Jack Martin, will be unavailable to face the Dogs.

The Blues indicated all other players had returned negative test results on Wednesday morning.

“While it’s unfortunate for Adam that he is unavailable for tomorrow night, we are glad he is feeling okay – after last Friday we obviously knew it was a reality that further players might have been impacted so we simply adapt and move forward, as we have all week,” Blues football boss Brad Lloyd said.

Cerra’s unavailability though will be tempered by an earlier-than-expected return from star midfielder Sam Walsh, who’s a confirmed starter for Thursday night’s clash.

Walsh has recovered quickly yet fully from an ankle injury suffered in the pre-season, with stand-in Blues coach Ash Hansen saying his return was a credit to both himself and the club’s performance staff.

As Cerra’s isolation period will end next Wednesday, he’s only expected to miss one game as the Blues’s Round 3 clash against Hawthorn will be held on Sunday April 3.

While Walsh will be a straight swap for Cerra, Martin’s replacement is still to be confirmed.

The Blues could turn to 40-gamer Lachie Fogarty, while Brodie Kemp could be re-called.

The WESTERN BULLDOGS remain hopeful skipper Marcus Bontempelli will be fit to face the Blues.

Bontempelli has been battling a minor ankle injury in the wake of his side’s loss to Melbourne last week but took part in the Bulldogs’ captain’s run on Wednesday.

Bulldogs coach Luke Beveridge also said No. 1 pick Jamarra Ugle-Hagan, who was the medical sub against the Demons one week ago, was “a chance to play”.

Beveridge said it was a delicate balance between finding his team’s forward mix while also exposing Ugle-Hagan at AFL level.

“We’ve got to pick the side a little bit for the future where we can and it will depend on availability here and there but also on how he’s going at the lower level.”

Ruckman Stefan Martin is unlikely to come into the team, but recruit Tim O’Brien could be included for his first game in Bulldogs colours. If O’Brien is deemed fit, either Josh Schache or Ryan Gardner would most likely make way.

MELBOURNE defender Jake Lever has been ruled out of his side’s clash with the Gold Coast Suns this weekend.

Lever missed the Round 1 clash against the Western Bulldogs with a foot injury.

Demons coach Simon Goodwin told reporters on Wednesday Lever wouldn’t face the Suns, with the club to take a conservative approach with the star defender.

In better news, premiership defender Trent Rivers is set to return to the senior line-up, providing he emerges unscathed from Wednesday’s training session.

Rivers, who didn’t face the Bulldogs last week due to a knee injury, looms as a replacement for fellow backman Christian Salem, who’ll miss up to two months after undergoing knee surgery.

GOLD COAST walked away from a famous win with no injury concerns. And after a terrific performance with a great spread of contributors, it’s hard to see the Suns making any unforced changes to take on the Dees.

Cameron spent Saturday night in hospital after a brutal collision against Essendon. While scans cleared him of serious injury, Cameron trained away from the main group on Wednesday, per 7 News Melbourne’s Mitch Cleary, who reported the Cats believe Cameron is “likely” to play on Friday.

Geelong will be without Sam De Koning after he didn’t pass a concussion test during the big win over Essendon.

SYDNEY should regain both Jake Lloyd and Chad Warner, who reportedly missed the Sydney derby after entering the AFL’s health and safety protocols.

The decision around who would come out of the Swans’ side looms as a tough selection conundrum. Angus Sheldrick would be stiff to miss out after making is debut, while Dylan Stephens and Sam Wicks might be a touch nervy.

The Blues aren’t the only club with protocols concerns, with WEST COAST reportedly set to be without champion goalkicker Josh Kennedy for Sunday’s clash against North Melbourne.

Multiple reports have indicated Kennedy has entered the AFL’s health and safety protocols.

Help is on the way for the Eagles, though, with key forward Jack Darling set to return after spending most of the summer training away from the club. He’s only recently met the AFL’s vaccination mandate.

Skipper Luke Shuey could also press his claims for a return from a hamstring injury, while Liam Ryan and Tim Kelly are likely starters after being sidelined by Covid protocols.

Alex Witherden should also return back in after serving his one-game ban, while defender Liam Duggan is ready to resume.

NORTH MELBOURNE defender Josh Walker, who came out of last week’s squad due to health and safety protocols, looms as the like-for-like to replace Ben McKay for the clash against West Coast.

McKay is set to miss this week with concussion.

Coach Sam Mitchell confirmed Day, who was expected to miss the first month of the AFL season after ankle surgery last year, was “a chance” to play against Port Adelaide on Saturday.

The Hawks are set to get captain Ben McEvoy and star forward Luke Breust back after their Covid-forced absences last weekend, but Day’s return could help build on the positivity from Mitchell’s first win in charge.

“We haven’t made a decision yet. He was playing limited time in the VFL, played three quarters or a touch more,” Mitchell said on Wednesday.

“He’s getting very close. We’ll watch him and monitor him. Whether we play him this week, next week or the week after will be something to monitor.

“He’s a chance for this week.”

PORT ADELAIDE will be forced into a host of changes after a devastating run of injuries.

Aliir Aliir is confirmed to miss at least six weeks, while Xavier Duursma is waiting on results of scans and Connor Rozee, Robbie Gray and Trent McKenzie are all racing the clock to prove their fitness.

A club debut looms for Sam Skinner as a defensive reinforcement, while Josh Sinn will be in the mix for a debut. Medical sub Steven Motlop, Sam Mayes and Jed McEntee could also be called upon, depending on how many casualties there are.

ADELAIDE star Rory Laird is pushing hard to make an early return to the senior line-up for the Crows’ clash with Collingwood.

Laird broke his hand three weeks ago during his side’s AAMI Community Series clash, with the club initially expecting him to miss three weeks.

But the multiple All-Australian and best and fairest winner took part in full training on Wednesday.

If deemed fit, Laird would almost certainly come into the starting 22 alongside Lachlan Sholl, who starred against the Dockers after beginning the game as the medical sub.

But the Crows will be without defender Andrew McPherson, who’s expected to miss one to two weeks with a minor hamstring injury.

COLLINGWOOD forward Mason Cox is in doubt for the clash against Adelaide after rolling his ankle late in the win over the Saints.

If Cox doesn’t play, Darcy Cameron would be a chance to return after being named as an emergency for Round 1.

Will Hoskin-Elliott (Covid protocols), Will Kelly (gastro) and Nathan Kreuger (concussion/suspension) are all pushing for a return to the team.

ESSENDON is set to welcome back star Jake Stringer for its crucial clash against the Brisbane Lions.

After a frustrating finish to his pre-season due to a groin injury, Stringer will likely come into the Bombers’ line-up and replace Kyle Langford, who’s facing up to 10 weeks on the sidelines with a hamstring injury.

The Bombers have also confirmed Aaron Francis should be available for selection after recovering from a knee injury.

BRISBANE will be forced to make at least one change for the Bombers clash after veteran Mitch Robinson was handed a one-game ban.

Speedster Harry Sharp, who was the medical sub against Port Adelaide, looms as the most likely inclusion.

Both Darcy and Fyfe were absent from the thrilling win over Adelaide.

Dockers football boss Peter Bell said Darcy had improved following some awareness in his calf, but said Fyfe was no guarantee to return.

“With his sore back, it’s been a little bit frustrating, we probably haven’t seen the improvement that we wanted and certainly that Nathan wants, some days are better than others,” Bell said.

“We haven’t given up hope for this weekend, but we’ll just see on Thursday what sort of training he can do at main training and then make a decision from there accordingly.”

Rebounding defender Nathan Wilson is also in the mix to return after sustaining a shoulder injury in Fremantle’s AAMI Community Series match against West Coast.

ST KILDA has already confirmed Paddy Ryder will return via the VFL and not fly west to take on Fremantle this weekend.

It should give his replacement Jack Hayes security after his stunning 18-disposal, three-goal debut against Collingwood.

There have been calls for Jack Higgins to get dropped after a poor showing against the Pies, but with the Saints lacking so much experience, it might be too strong.

The GIANTS could regain two big names for their clash with the Tigers, with key forward Jesse Hogan and star defender Nick Haynes in the mix to return.

Both Hogan (soreness) and Haynes (stomach) took part in a Giants VFL practice match last weekend. If they emerge from full training on Thursday unscathed, they’ll put their hands up for selection.

“Nick and Jesse have done all the right things and will put their hands up for selection if they get through training on Thursday,” Giants medical boss James Rahme said.

“They both got through their game time on the weekend with no problems.”

Jake Riccardi went goalless against the Swans and could be the unlucky one to make way if Hogan is called on, with Cameron rarely using the pair plus Harry Himmelberg in the same forward line last season.

RICHMOND will almost certainly be without two premiership stars in Jack Riewoldt (thumb) and Dion Prestia (hamstring) for its clash with the Giants.

Kamdyn McIntosh (calf) should be fit to return. Matt Parker could be the man to provide some forward line support, while Thomson Dow and Hugo Ralphsmith are options to come into the 22.