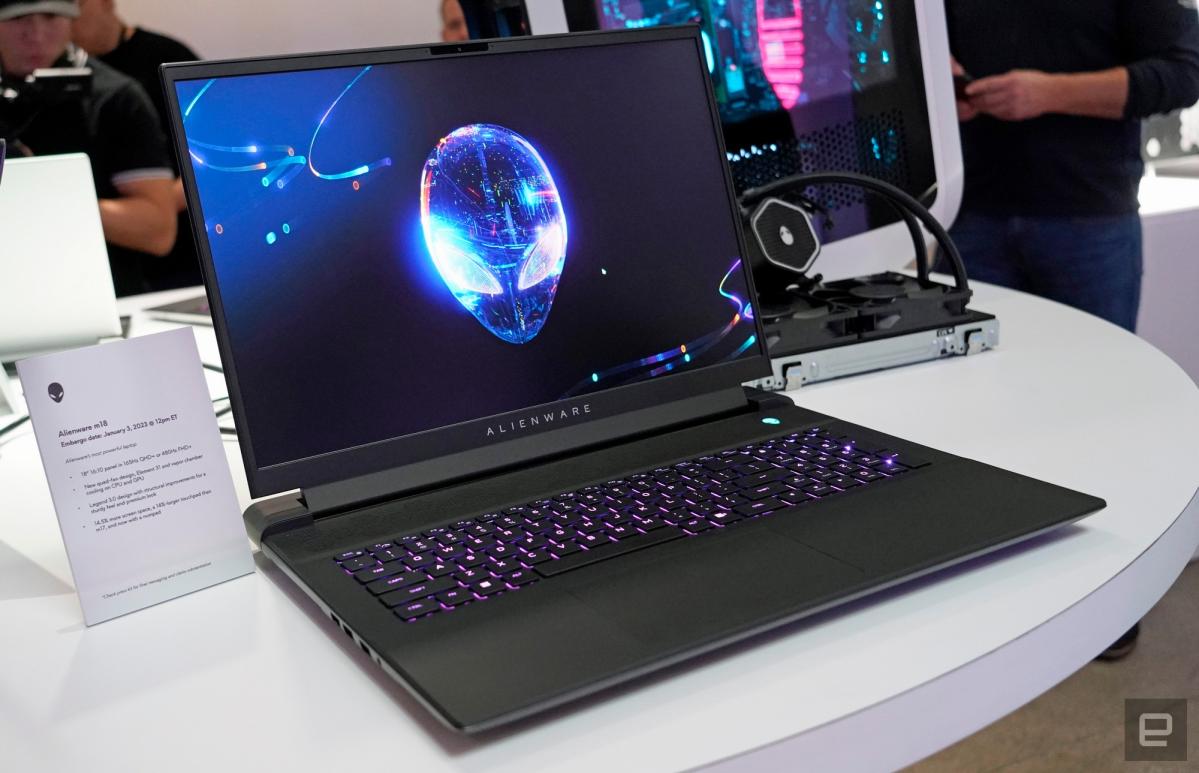 Alienware’s gaming laptops are getting a makeover, and one will even feature a massive 18-inch display. Dell’s gaming brand has been on a roll in recent years with its bold “Legend” design language, which has veered into a very sci-fi aesthetic, as well as its ultra-thin X-series laptops. This year, Legend is tweaked for the third time with an emphasis on “form, function and quality”. Alienware’s new machines still look very different from most other gaming laptops, but now they’re easier to hold, easier to open, and thankfully there’s no more glossy black plastic to be seen.

Perhaps the most striking example of Legend 3.0 is Alienware’s new m18, its largest and most powerful gaming laptop to date. This beast sports an 18-inch screen that’s 14.5% larger than the previous 17-inch model. Obviously, portability isn’t the main concern here, it’s power. The m18 features all the latest hardware, including Intel’s fastest 13th Gen HX mobile processors, NVIDIA’s latest GPUs, or you can configure with an AMD Ryzen chip with next-gen Radeon graphics .

While just as thick as the previous m17, the 18-inch Alienware also offers significantly better cooling, with a vapor chamber that covers the GPU and CPU, seven heat pipes, and four fans for improved airflow. by 25%. You’ll be able to add an optional Cherry MX mechanical keyboard, up to 9TB of storage, and choose between 165Hz and 480Hz 1080p quad-HD displays. With a total system power of 250 watts, the m18 is clearly aimed at the most demanding gamers, those who won’t hesitate to lug around a huge laptop. If you were intrigued by Alienware’s massive Area 51m, its now-defunct laptop that used replaceable desktop components, the m18 may be a solid option.

For the more sensitive gamers, there’s the smaller Alienware m16, which features the same design and similar cooling upgrades. This laptop can be equipped with 16-inch (2560 by 1600) quad-HD+ panels running at 165Hz or 240Hz, or a 480Hz FHD+ display. Both m-series laptops feature the NVIDIA G-SYNC and AMD FreeSDync support, wide color gamuts, and Dell ComfortView Plus technology, which reduces harsh blue light.

If the Alienware m16 and m18 look a little chunky compared to most other gaming laptops, that’s pretty much by design. This has always been the company’s policy for bigger and more powerful machines. If you want something thinner and maybe more fashionable, you’ll have to look to the X-series laptops. Last year we got the Alienware x14, which was incredibly thin for the whole power it contained. This year, the company is introducing the x16, which, you guessed it, sports a 16-inch display.

Alienware calls the x16 its flagship design of the year, with a large 16 x 10 display and a stronger all-metal enclosure. It even manages to fit into a six-speaker audio system, with two upward-firing tweeters and two woofers for solid bass. Under the hood, it’s powered by Intel’s fastest 13th Gen non-HX processors, up to the 14-core 13900HK and NVIDIA’s full suite of RTX 4000 GPUs. Alienware says it can also be equipped with AMD’s next-gen hardware, but we don’t have any details on that yet.

The x16 is just as striking as Alienware’s previous slim gaming laptops, but the new Legend aesthetic makes it look more refined. It’s got all the bling you could want, too, with over 100 micro-LEDs along its rear lighting panel, RGB lighting on all its keys, and an RGB touchpad that’s also 15% larger than previous x17s. . Now, I’m still not sure why you would want RGB lighting on a touchpad, but it sure looks cool. The x16’s 6-pound weight may be an issue for some buyers, though, especially since Razer’s Blade 17 roughly matches it.

As you’d expect, the Alienware x14 is also making a comeback this year, and it still looks impressive. It sports a new 14-inch quad-HD+ display running at 165Hz, and its hardware is less beefy than the 16-inch model, complemented by one of Intel’s 13th Gen Core i7 processors and NVIDIA’s RTX 4060. I will have to pay for such a thin case. Alienware claims it’s still the thinnest 14-inch gaming laptop on the market, measuring just 14.5mm.

Choosing any laptop, especially gaming machines, always comes down to weighing the potential trade-offs. At least now, Alienware has a machine for pretty much everyone, from style-conscious people to people who want an even more desktop-like experience on the go.