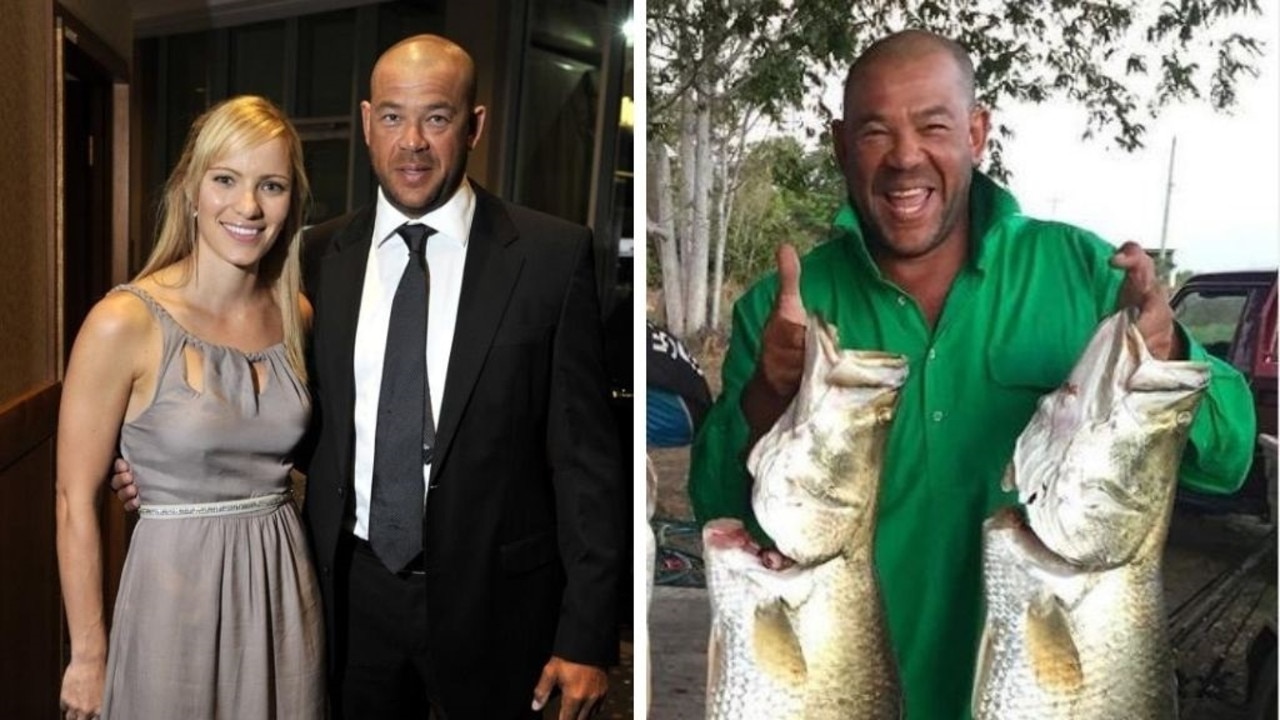 Andrew Symonds was doing what he loved most then headed to a local watering hole just hours before his tragic death on Saturday night.

Andrew Symonds had been fishing and visiting a local club shortly before his death, but mystery still surrounds the final few hours before his fatal car crash.

The Aussie cricket legend died on Saturday night when his car veered off the road outside of Townsville, sparking an outpouring of grief and tributes from around the world.

Police are investigating the crash and will prepare a report for the coroner.

Tea DailyMail reports Symonds and wife Laura had recently separated but had remained close as they lived apart in the months before his death. According to the publication, Laura and the pair’s two young children, Chloe and Billy, had been living in Sydney while Symonds was in north Queensland.

It has been revealed Symonds stopped off at Brothers Leagues Club — which is a short distance from his house — on Saturday afternoon, still in his fishing gear.

Brothers Leagues Club CEO Justin Wilkins told the DailyMail Symonds did not drink a lot before leaving the venue that evening.

“I’d say he spent the morning fishing before he got to the pub,” Mr Wilkins said. “He stayed there until about 8pm, and then he left.

Symonds reportedly went home after leaving Brothers to pick up his dogs but died a few hours later. His sister Louise told the DailyMail “we just don’t know” what the cricketer was doing driving late at night on Hervey Range Road.

Local Garry Clark was with Symonds at Brothers Leagues Club on the Friday night, saying: “I shook his hand and had a chat.

“He was teasing me because his team the Broncos just beat my team Manly that night and we were having a laugh about it.

“I am in shock. What happened keeps popping into my head.”

Symonds’ great mate, former Australian and Queensland cricketer Jimmy Maher, said the 46-year-old’s family is “hanging in there” but are “all doing it tough” as he broke down during an interview with Today on Tuesday.

“Getting up here (to Townsville) and getting off the plane, you’re used to him being in the car and he’d always say, ‘Mahbo, you’re five minutes late’. I’d say, ‘Mate, I didn’t fly the plane’.

“That was the sort of bloke he was and it really hit home yesterday, walking through that door to know he wasn’t going to be there.

“Far away from the cricket field, the things that we shared were … things that I’ll miss. Family stuff and all those things — he’s just a true friend.”

An autopsy has not yet been conducted as part of the police investigation into the accident. Tea Townsville Bulletin reports there is not a doctor in the area who performs those types of procedures, with one needing to be brought in from elsewhere in Queensland.

Channel 9 reporter Mia Glover told FIVEaa radio on Monday you can “see that there’s a lot of brake marks on the road from where his car veered off before it eventually rolled”.

“At this stage police still have no idea why he left the road,” she added.

“One rumor that’s going around by locals is he may have swerved to miss an animal but everything’s under investigation at the moment.”

A witness, who found Symonds in his vehicle after he crashed, told the Courier Mail the cricketer’s two blue heelers refused to leave his side.

“One of them was very sensitive and didn’t want to leave him,” she said. “It would just growl at you every time we tried to move him or go near him.

“My partner tried to get (Symonds) out of the car, to put him on to his back.

“He was unconscious, not responsive and had no pulse.”

Symonds’ sister visited the scene of the tragic accident on Sunday, leaving a handwritten note expressing her sense of loss.

“I wish we had one more day, one more phone call.

“My heart is broken. I will always love you my brother.”