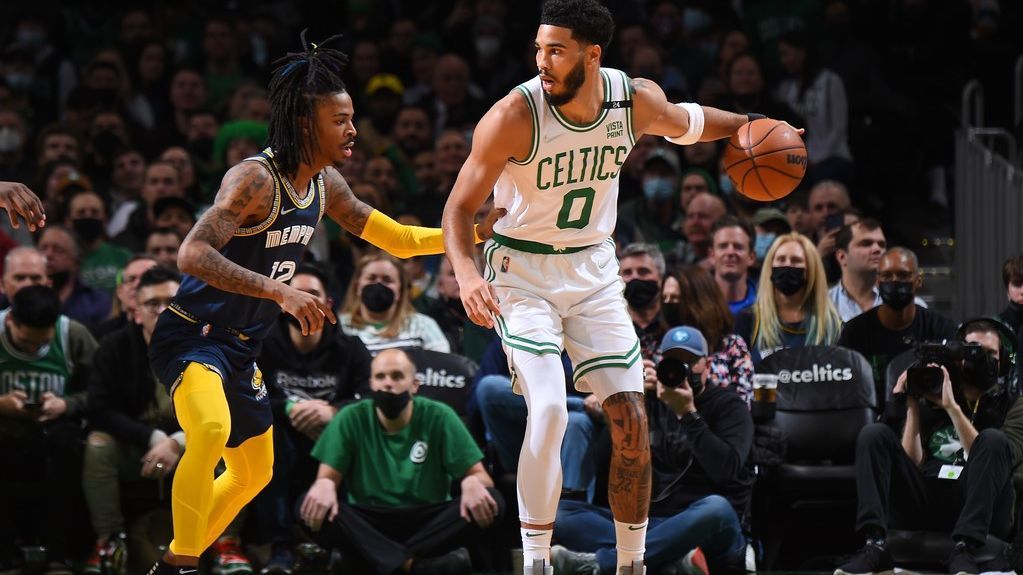 BOSTON — When Celtics guard Marcus Smart sees Jayson Tatum get going the way the All-Star forward did in the fourth quarter Thursday night against the Memphis Grizzlies, he said his approach becomes a simple one.

“Make sure I’m staying out of his f—ing way,” Smart said. “Let him do his thing.”

Smart and the Celtics did just that Thursday night, as Tatum’s 21 points on 9-for-13 shooting in the fourth quarter was enough to outduel Grizzlies superstar Ja Morant’s 30 points on 10-for-15 shooting in the second half, lifting Boston to a 120-107 victory over Memphis here at TD Garden.

The win, Boston’s 13th in its last 15 games, and one that moved the Celtics into sole possession of fifth place in the Eastern Conference standings, was one of the team’s best victories of the season. Not only did the Celtics (38-27) knock off one of the league’s best teams in the Grizzlies (43-21), they did so with Jaylen Brown, sidelined with a sprained ankle he suffered in the opening moments of Tuesday’s victory here over the Atlanta Hawks.

It’s a win Boston picked up thanks to Tatum’s heroics, as he went shot-for-shot with Morant and came out on top.

“It was a lot of fun,” Tatum said of the back-and-forth with Morant. “The place was electric tonight. I think it was just one of those moments: two guys just going at it, doing what they can to will their team to a victory, and it just so happened that it was a back and forth thing. “

Despite his seemingly nightly ridiculous highlight — a one-handed alley-oop finish on a give-and-go fast break with Kyle Anderson — Morant got off to a slow start as he went into the halftime break with just eight points on 3 -for-14 shooting. In the second half, things escalated quickly as he finished with those 30 points.

Morant did his best to will Memphis back into the game single-handedly on a night when the Grizzlies struggled against the league’s second-ranked defense. Morant, though, didn’t enjoy the battle in the same way Tatum did — for one obvious reason.

While Boston broke the game open in the third quarter after holding a two-point halftime lead, that was largely done with Tatum serving as a spectator. That changed quickly in the fourth, however, when he got going largely by attacking the rim, as he finished 8-for-10 inside the arc. His lone made triple in the quarter, which came with 1:34 remaining to put Boston up 115-100, was the celebratory exclamation point to a late-game surge that mirrored the way the Celtics have completely turned their season around over the past several weeks.

“I think, as a competitor, that’s what you look forward to,” Tatum said. “Somebody you respect like that, who’s doing big things in the league, you just want to compete. The fourth quarter is the time to win the game, and I just wanted to make the right play. Sometimes it’s for yourself, and just try to get the job done.”

For Morant, Thursday’s game proved to be a teachable moment. Despite being a 6-foot-3 guard, Morant has been one of the league’s best interior scorers this season thanks to his combination of agility, speed and quickness. Boston was happy to sag off and force him to take one shot after another from the perimeter. And, early in the game, both he and Desmond Bane, who combined to go 4-for-21 in the first half, struggled mightily.

The two of them both got going as the game progressed, going 9-for-14 from behind the 3-point arc in the second half and Morant said that when teams attempt to force him to shoot jump shots, he’s going to have one reaction roof.

“I shoot,” Morant said. “They sag off, I shoot the ball. I put in a lot of work, you know, shooting behind the arc. So teams back up, go under, I shoot the ball, shoot it with a lot of confidence, shots begin to fall.”

They began to fall repeatedly in the second half, as he tried to will the Grizzlies back into the game. Ultimately, though, Tatum’s response was too much for Morant and the Grizzlies to answer.

“That’s him getting going,” Morant said of if Memphis did anything wrong defending Tatum down the stretch. “We tried to make his shots as tough as possible, but with a special talent like that, guys find a way, pretty much.

“No disrespect, switching the person, but same with me. I was shooting terrible at the beginning, I saw some go and shots started falling. Pretty much the same thing with him. He got going, got to his spots where he’s comfortable out on the floor and he made some big-time shots for his team to keep the lead and come out with the win.”

The win, which came the same day Celtics coach Ime Udoka was named Eastern Conference Coach of the Month for February, was the latest example of Boston’s remarkable midseason about-face. Sitting at .500 after a loss to the Atlanta Hawks on Jan. 28, the Celtics have since rattled off 13 wins in 15 games, surging into fifth in the East and within four games of the top-seeded Miami Heat.

And while there have been plenty of reasons for the change — from Boston’s defensive improvement to the acquisition of Derrick White to Udoka settling on a narrowed rotation and the Celtics getting healthy — it’s also coincided with Tatum playing much better, as Memphis saw Thursday night.

“I think watching us now, we play with a lot more passion and we just seem like we’re having a lot more fun,” Tatum said. “Obviously when you’re winning you tend to play with a little more enthusiasm and smile and laugh and things like that. It wasn’t happening too often at the beginning of the season.

“This is basketball, at the end of the day, and it’s supposed to be a lot of fun. And we’ve been having a lot of fun lately.”