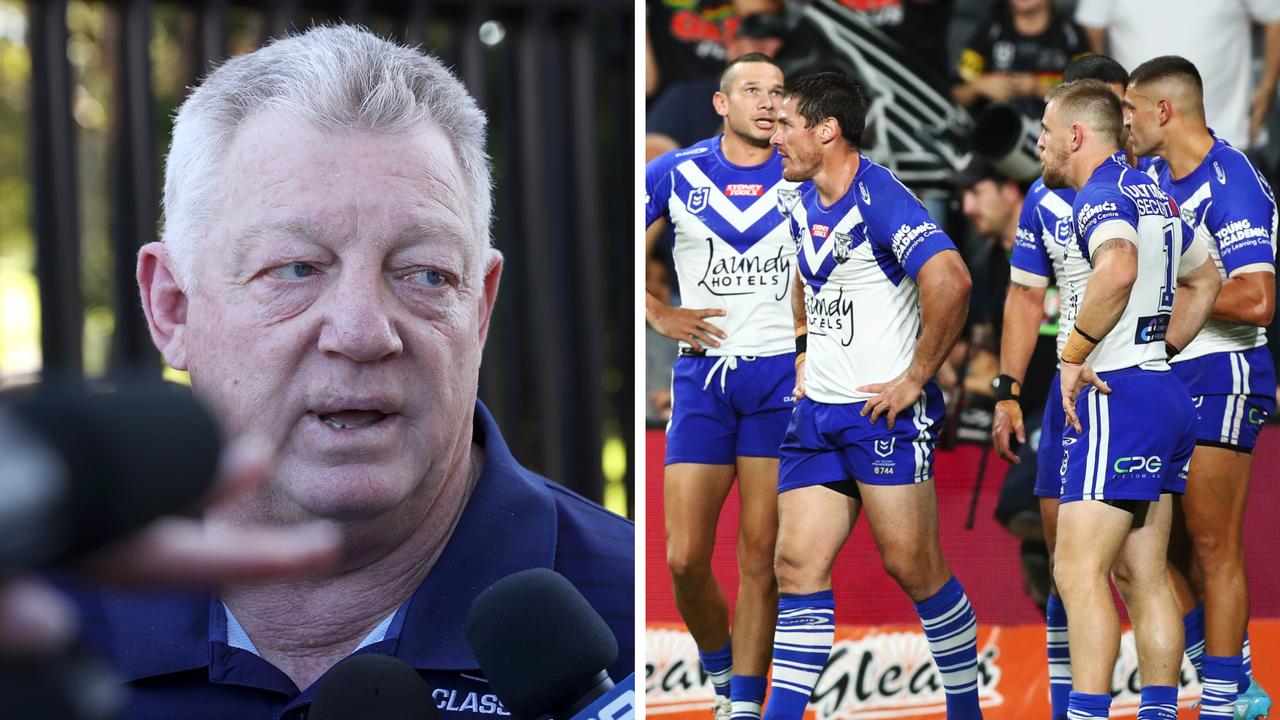 Phil Gould did it before at Penrith and while admitting the situation at Belmore is not exactly the same, the rugby league supremo has a plan to make the Bulldogs a powerhouse again.

In a dramatic week at the Bulldogs, which saw Trent Barrett resign as head coach and rumors of potential player movement swirl, Gould took to his‘Six Tackles with Gus’ podcast to clear the air.

Speaking on the podcast, the Bulldogs general manager of football revealed he has an 18-month plan to put the club in a position to “totally reshape” what it looks like.

“There are a lot of similarities and differences [to Penrith],” Gould said.

“They’re in a different area, but there’s no stopping the Panthers now. The Bulldogs will be good too, I guarantee it.

“The Bulldogs are a big club. They’ve got a massive fanbase and the club has been in the doldrums for years. I know it’s been frustrating, but you can’t just wave a magic wand and fix that. It’s taken a long time to get into this state, you don’t just suddenly turn it around in a day.”

Gould said that in the past the Bulldogs have tried to “recruit their way out of trouble” and that at times, in the pursuit of short-term results, the club has lost sight of its long-term aims.

“That’s not the way to fix the club, you’ve got to take a long-term view of it,” Gould said.

“It’s kind of saying ‘all right, I know you’ve had a long period of losing, but there’s going to be more before we get better’. That’s just how it’s going to be.

“My aim is that the Bulldogs are never in this position again. This club should never be in that position. They will have a recruitment and development program that will sustain them long into the future.”

Gould revealed that in 18 months time the Bulldogs will have their salary cap in a position where they will be able to “totally reshape the look” and “culture” of the organization.

That will include setting up the foundations for an academy system which he said will “provide a steady stream of young talent” to sustain the Bulldogs “for a long period of time”.

“That hasn’t been in place,” Gould said.

“That’s been neglected for a long period of time, therefore we have some players showing NRL potential in the junior ranks, but nowhere near enough.”

Gould has already gone about rectifying that, speaking to the families of 15 players aged between 18 and 21 over the weekend at Magic Round.

“I want an academy that starts at 14, 15, 16 years of age for local talent and other talent that we recruit to be developed as Bulldogs from those teenage years,” Gould added.

Barrett was supposed to be part of that vision according to Gould but he said that the pressure of the job “probably got the better of him”.

“I’ve been very worried about him the last couple of weeks, his emotional state,” Gould said, revealing Barrett had been in a “really positive” frame of mind only on Sunday morning.

“He had the program ready for the week, changed a couple of things about the training,” Gould said.

“Then he rank up and said he was going to make some changes to the team. He was sort of up on Sunday morning.”

But when a report surfaced on Sunday afternoon, claiming the board was meeting to discuss Barrett’s future, the mood shifted.

“There was a report Sunday afternoon that the board was meeting to discuss… which was a rather embellished explanation of what was happening with that meeting,” Gould said.

“It was a sub-division of the board that meets fairly regularly. I don’t believe at any time that Trent being sacked was on the table. Then Sunday night, something must have happened Sunday afternoon, and after I finished the broadcast for Channel 9… I got a phone call from his manager, who said he was going to pull the pin.”

Gould jumped in his car and talked to Barrett while he was driving, although the former Bulldogs coach was “sort of struggling to talk” at that point.

“I pulled over into a laneway, and sat there for an hour as he discussed his frustrations, poured his heart out,” Gould said.

“He had come to the conclusion, he said ‘I can’t see my way out, I don’t know how I’m going to fix this’. In his own mind he had come to the realization that things weren’t going to get better, and he needed to hand it over to someone else.”

At the moment that person is Mick Potter, who will serve as the interim coach of the club for the rest of the season.

As for who could take over long-term, Gould said an “experienced” coach is a must, which likely rules out either Cameron Ciraldo or Kristian Woolf.

Premiership-winning coaches Shane Flanagan and Paul Green are the best-available options, although Brad Fittler has also been linked to the role.

The Blues coach dodged questions about his potential interest on Tuesday while Gould also said “it won’t be happening” when asked if Fittler could take on the job.