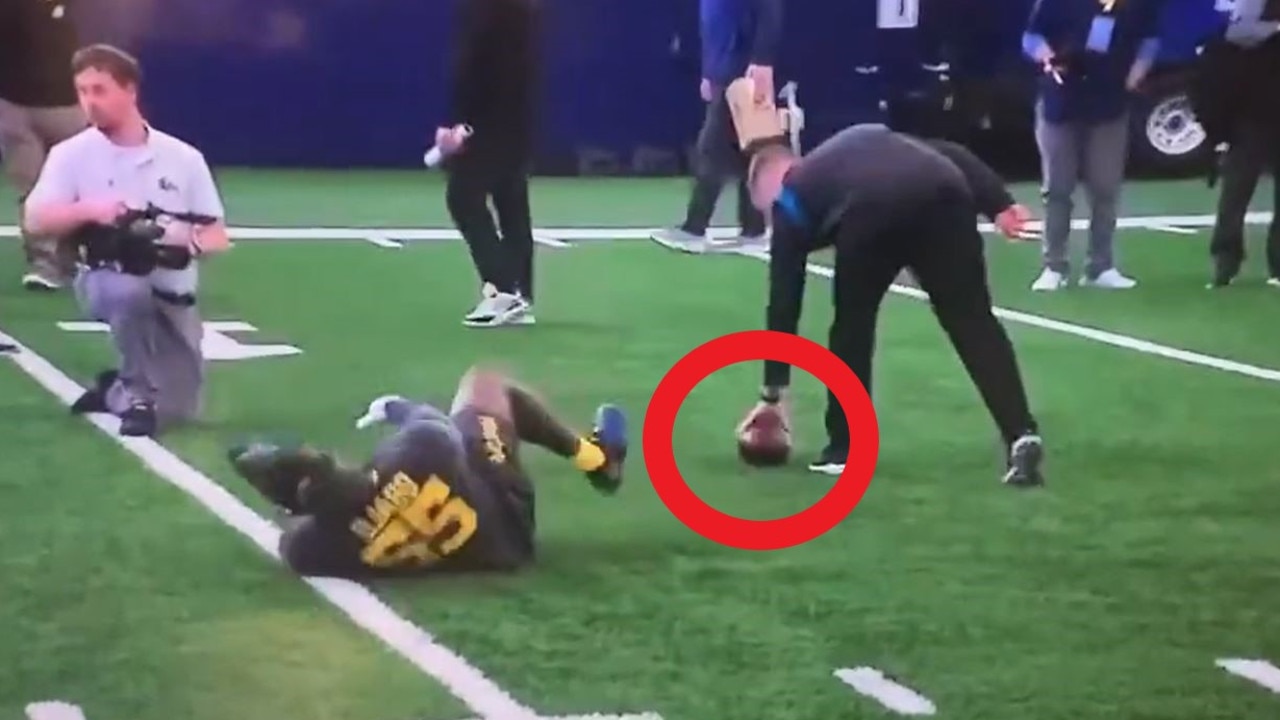 Footage that has been viewed millions of times has made America queasy as it exposes the brutal reality of the NFL business.

Fans and pundits in America have lamented the treatment of David Ojabo after footage of the college football player going down injured went viral.

Ojabo was completing drills during a pro day workout in front of scouts ahead of next month’s NFL draft when he collapsed with what was later revealed as a torn Achilles — a devastating injury that often keeps athletes out of action for 12 months and possibly longer.

The linebacker from Michigan University dropped to the ground without a hand being laid on him after catching a ball and changing direction quickly.

But it’s the reaction of those around him that has voices in the football world speaking up about their concerns. In a video that has been watched more than nine million times on Twitter, nobody rushed to help him and in fact, one person strolled right past Ojabo to pick up the ball he had just dropped.

Photos later emerged of medical staff coming to Ojabo’s aid but the immediate response from those watching on has come under fire.

Ex-NFL player Bucky Brooks tweeted: “I know the #NFL is a cold business but watching the lack of concern or empathy from the scouts, coaches and observers following David Ojabo’s injury bugs me. Perhaps someone should’ve checked on him instead of grabbing the ball and moving to the next drill. Just a thought.”

Other current and former NFL players also weighed in, some sharing their own stories of cold-hearted treatment. Philadelphia cornerback Darius Slay tweeted: “Should see practice!! I’ve seen somebody get hurt and they just move the ball up 10yds and continue like nothing just happened. S**t is sad.”

Former Titans and Raiders linebacker Will Compton wrote: “A story about being a commodity. One time I got hurt during practice & @CoachVrabel50 didn’t even move the drill up He just ran the next play while I was still on the ground & yelled ‘we don’t have time for this – can someone who’s not ap** *y get in there??’ Had a broken leg.”

ESPN’s Louis Reddick said: “Video of people walking past David Ojabo in immediate aftermath of his going down w/injury (which turned out to be a devastating one) is infuriating. No empathy? No assistance at all until medical professionals could help him? This is a relationship business man. That isn’t it.”

Jenna Laine, also of ESPN, added: “I realize that a crowd of people did come to David Ojabo’s side after this, and I’m sure there was a great deal of shock witnessing this injury, but Bucky (Brooks) is right. Who cares about the ball? This young man needed COMFORT. Doesn’t matter who it came from.”

Fox Sports draft analyzer and college football expert Joel Klatt wrote: “The David Ojabo injury is heartbreaking! He has massive potential and hopefully will still realize it in his future NFL career. It reminds me that GAMES are the things that actually matter rather than these glorified gym class workouts.

“These scouts and execs can turn on the FILM and watch Ojabo’s talent, but they want to run him through ridiculous drills and then they all walk away when he goes down. BRUTAL business!”

American sportscaster Mike Florio was also critical. “It just shows you what it is. These guys are parts of a machine. When one part breaks, you go get another part. Next man up means last man out. Scrape them off the field, move on,” he told NBC.

“It gives us a glimpse into the lack of humanity that is baked into the system.

“It’s a reminder of the cold, objective, dispassionate nature of the football business. That’s all it is.”