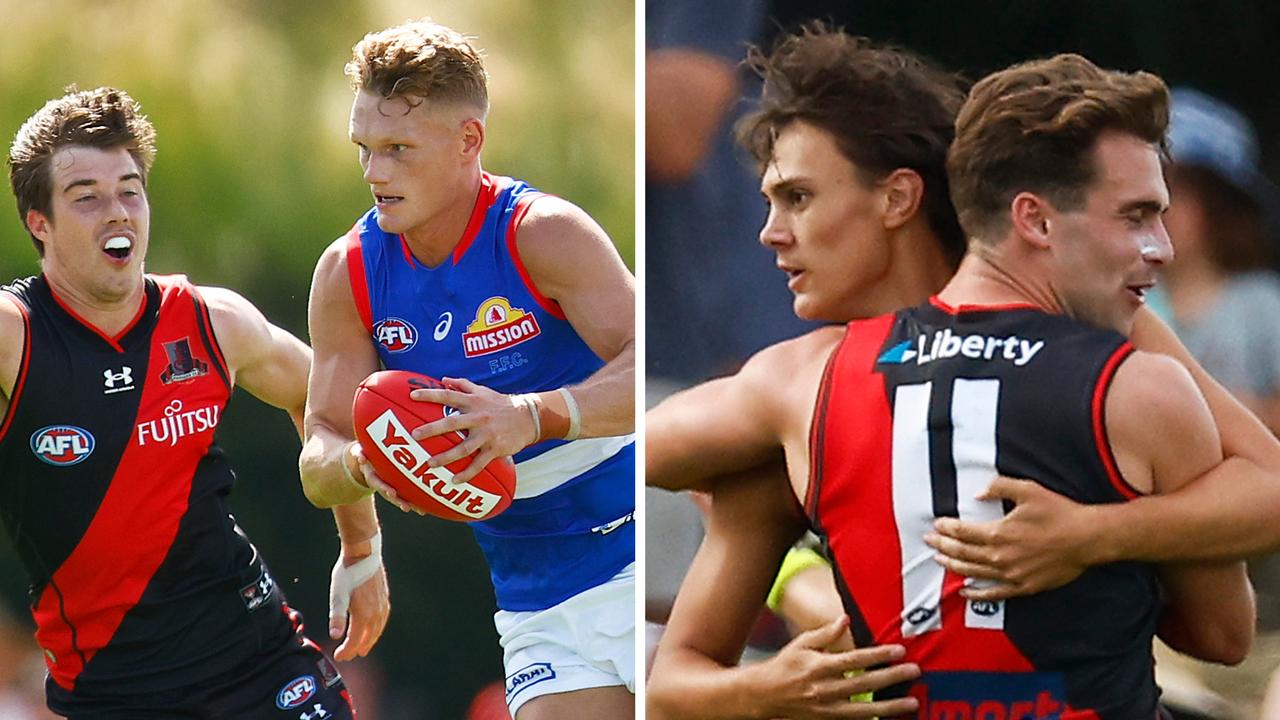 Essendon has defeated last year’s grand finalists the Western Bulldogs by seven points in front of a home crowd at The Hangar, 12.9 (81) to 11.8 (74).

The Bombers and Dogs matched each other for much of the match, with the latter holding the ascendancy for large parts of the game, but some polish from prospective recruit Tex Wanganeen gave them the edge at the death … before Wanganeen and fellow rookie hopeful Nick Martin were both officially put onto the rookie list.

While the Dogs lost, there were impressive showings from many of their stars, with Adam Treloar looking in ominous form along with Marcus Bontempelli before they were eventually put on ice.

These two sides met in an elimination final down in Launceston last year, with the Dogs prevailing on their way to the Grand Final, where they fell short of a second flag in six seasons.

The Bulldogs were without midfield gun Bailey Smith (groin soreness) and key defender Alex Keath (back soreness) while recruit Tim O’Brien (hamstring) is racing the clock for Round 1.

The match consisted of four quarters of exactly 30 minutes.

Both sides looked speedy and classy moving through the midfield early on, generating marks inside 50 before Nick Hind kicked truly for the first goal of the match.

The good start from Essendon was soured shortly after, however, with Aaron Francis staying down after a marking contest and needing to be helped from the ground.

“Francis, we know he’s had a wretched run with injuries … he’s still down on true center wing. He’s not in a good way,” commentator Ben Waterworth said.

Former Bomber Brendon Goddard added: “He was directly involved in that marking contest so it may be a landing injury which is obviously quite concerning, particularly the heights he comes down from.”

The Bombers continued to bring about scoring opportunities but, like the Bulldogs, were wayward with their execution in front of goal barring Hind’s major.

Mitch Hannan got the Dogs’ first goal after some “trademark” forward half play with fast ball movement by hand.

It was followed almost immediately by a goal to Stefan Martin, with the ruck option roving a contest in the goal square and finishing truly off an Adam Treloar handball.

In better news for the Bombers, Francis returned to the field and continued to play, recovering from his earlier injury scare, although Waterworth noted the 24-year-old didn’t “look 100 per cent”.

The Bombers kept the ball in their forward 50 for the better part of five minutes, but inaccuracy continued to haunt them.

A superb pack mark from Aaron Naughton led to the Dogs’ third straight goal, giving his side an 11-point lead.

The Bombers finally got their second goal, this one via Archie Perkins, but the Dogs also added a couple of goals to their total to keep the 11-point buffer midway through the second quarter.

Will Snelling kicked Essendon’s third goal to reduce the margin to under a goal.

Marcus Bontempelli took a contested mark in the forward 50 and converted his set shot to get the Dogs’ fifth goal, with Aaron Naughton kicking his second goal shortly after.

Naughton looked worse for wear after a marking contest that appeared to insult his finger, but he continued on and quickly allayed any fears.

The Bombers hit back late with a couple of goals, bringing the margin back to four points heading into the main break.

Despite the tight margin, Goddard was left unimpressed by some of Essendon’s defensive lapses, which saw the Dogs take a number of uncontested marks close to goal.

“Essendon haven’t really helped themselves because I think they’ve been poor and lazy in defence,” he said at half-time.

“They’ve been thereabouts, think they’ve got them in a really strong position defensively, they set up really well behind the ball but then the Bulldogs are able to still find those spare men.

“Essendon are guarding grass – they’re either just ball watching or spectating, hoping they don’t kick it to the guy that’s two or three meters in front of them.”

The Bombers hit the front early in the second quarter after a crumbing goal from Devon Smith, which came shortly after an impressive launch from Jordan Ridley to take a great mark.

Showing their fast ball-movement, the Dogs quickly got back out ahead to return to an 11-point lead.

Adam Treloar was particularly impressive in the third quarter, kicking a brilliant goal and looking assured with the ball in hand.

The Dogs held a 12-point lead heading into the final quarter, but it was quickly pegged back with two goals to the Bombers at level proceedings at 62-62 five minutes into the final term.

As the fourth quarter continued to go goal-for-goal, Tex Wanganeen came onto the ground and put in a very strong showing in his bid for a list spot at the Bombers, kicking a brilliant goal three minutes into the opening term.

Later in the quarter, with the game on the line, Wanganeen yet again showcased his supreme talent, pouncing on a loose ball after a marking contest and finishing off for a goal.

It proved the match-winning goal as the Dogs failed to close the gap in time.

Given one quarter to work with, it’s hard to imagine Tex Wanganeen could’ve done any more in his bid for one of Essendon’s final list spots and is more than serving of his rookie selection in the moments after the match.

Wanganeen and Nick Martin were both battling it out for one of the Bombers’ vacant list spots and, injected into the game against the Dogs in the fourth quarter on Wednesday, the 18-year-old showcased his supreme talent.

The father-son prospect kicked two goals of his own and nearly set up another with several instances of classy, ​​instinct-based football, which wowed those in attendance at The Hanger – including Goddard.

“If I’m going to be honest, the most exciting thing was watching that last quarter and seeing Tex Wanganeen, I’m not even kidding,” he said.

“It looks like he has that freakish ability to do things that others can’t, but what I was most impressed with was, the things he did, they were simple things he did really well as a small forward, which is the role he’s clearly going to play if he does get that position.”

During the fourth quarter, after some brilliant crumbing work that led to a goal, Waterworth added, “The Bombers fans are already in love with him, there’ll almost be an uprising if he isn’t given a list spot!”

It was as promising a quarter as one could hope for and could well be the one that, in retrospect, sealed his spot on an AFL list, with the club confirming straight after the match Wanganeen and Martin had been put onto the rookie list.

2) DONATIONS WIN BUT ROOM FOR IMPROVEMENT

While Wanganeen’s offensive capabilities were lauded, Goddard took issue with some of Essendon’s defensive lapses that gave the Bulldogs several scoring opportunities.

The Bombers eventually got the win, but instances of the side “guarding grass” had Goddard sligjtly concerned at what such lapses could cost them come the season proper.

“Essendon haven’t really helped themselves because I think they’ve been poor and lazy in defence,” Goddard said at quarter-time.

“They’ve been thereabouts, think they’ve got them in a really strong position defensively, they set up really well behind the ball but then the Bulldogs are able to still find those spare men. Essendon are guarding grass – they’re either just ball watching or spectating, hoping they don’t kick it to the guy that’s two or three meters in front of them.

“If you’re within that 30 or 40 meters, I think for Essendon there’d be a clear message going into the third quarter that you have to be on watch. The Bulldogs have got the ability and ball users to pull the trigger on those kicks. The uncontested marks it felt like the Bulldogs were almost toying with them.

“I think defensively Essendon need to pick up their game. That’s an area coming into this year that they need to improve.

“They made their identity defensively in the first half of last year but then they lost sight of that. I think one of the main reasons is being a young team and not being able to sustain that effort and intensity that’s required for a whole season.”

He was put on ice well before the game was finished, but Adam Treloar’s accumulation of the footy and use of it would’ve had Dogs fans salivating after he finished last season well below his best.

A marquee recruit from Collingwood, Treloar was beset by injury in 2021 and looked overlooked in the finals series despite his valiant effort to return in time for those crunch matches.

Treloar’s long history with soft-tissue setbacks is undoubtedly a concern and he has been on a modified training program heading into the 2022 season, but the signs he showed on Wednesday indicated he will be fit and firing come Round 1.

Such is the Bulldogs’ midfield depth that Treloar can afford to take his time in getting back to full tilt, but the 28-year-old had brilliant passages of play and influence for much of Wednesday’s hit-out before eventually being taken out of the game for the final quarter.

“He’s had a huge third quarter,” Goddard said of the former Magpie.

“I think he had enough of it in the second quarter but he’s been a lot more efficient this quarter. A lot of his touches this quarter have come forward-of-center which has had an impact on the scoreboard.”

The match got underway at 3pm EDT from the Bombers’ training base, The Hangar.

Recap Essendon v Western Bulldogs in our blog below!