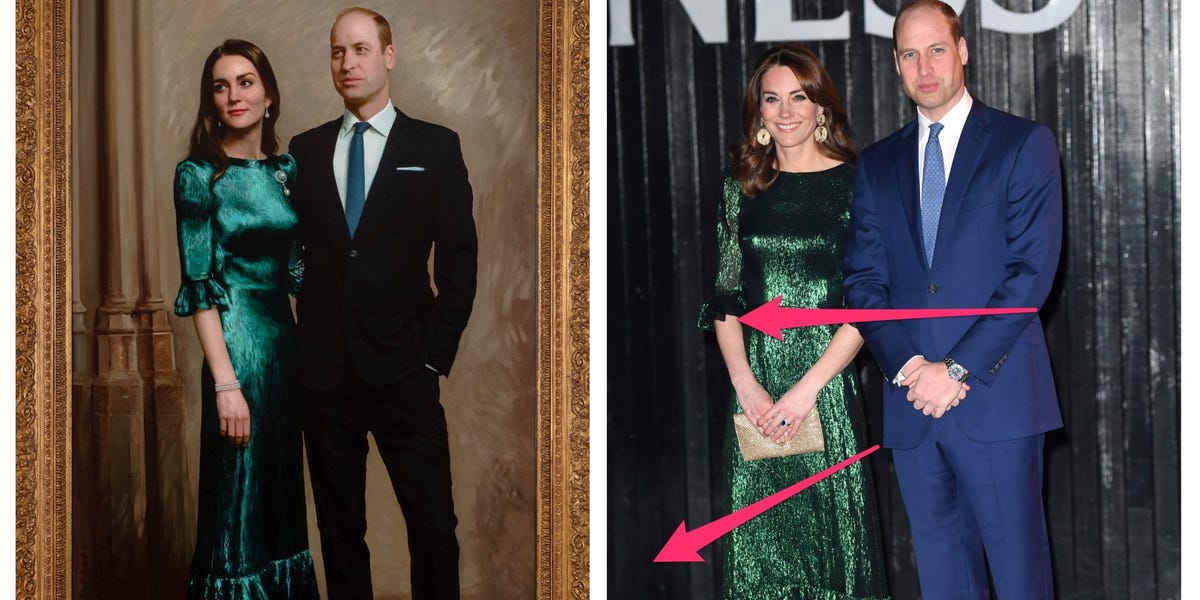 The first official portrait of the Duke and Duchess of Cambridge was released on Thursday.

Kate Middleton and Prince William were painted by British artist Jamie Coreth as a gift to the people of Cambridgeshire, where they are titled for, according to a Kensington Palace press release.

The portrait shows the couple posing in formal clothes at an undisclosed location. Prince William wore a suit and tie and Middleton wore a £1,595, or $2,000, sparkly dress by The Vampire’s Wife that she previously wore during a royal tour of Ireland in March 2020.

There are many references in the portrait that may not be visible upon first look, including tributes to Cambridge, England, as well as the couple’s public and private life. Here are all the hidden details you might have missed.

According to The Independent, Augusta was born in Germany in 1797 and was named Duchess of Cambridge upon her marriage to Prince Adolphus, the Duke of Cambridge, at Buckingham Palace in 1818.

After her death, the brooch was passed down through the royal family. Queen Elizabeth has been photographed wearing it on several occasions, The Independent reports.

William and Middleton became the Duke and Duchess of Cambridge when they got married in 2011.

The portrait shows the balance between their public and private life

Although William and Middleton wore formal attire for the portrait, their pose could be seen as informal. They stand with their arms around one another, both looking to the side rather than directly at the artist.

Coreth said he wanted to convey the couple as “both relaxed and approachable,” and to show a balance between their public and private lives.

“I wanted to show Their Royal Highnesses in a manner where they appeared both relaxed and approachable, as well as elegant and dignified,” Coreth said in a statement shared in the press release.

“As it is the first portrait to depict them together, and specifically during their time as The Duke and Duchess of Cambridge, I wanted the image to evoke a feeling of balance between their public and private lives,” he added.

The duchess channels Carrie Bradshaw with her shoes

It’s unknown if Middleton is a fan of the TV series or films. But the shoes have long been associated with “Sex and the City” ever since Carrie wore the blue version of the heels for her proposal and wedding to Mr. Big. She wore the shoes again during an episode of the reboot series, “And Just Like That,” which aired earlier this year.

The artist incorporated Cambridge into the portrait by painting the background with the same tones and colors of many of the historical buildings that the city is known for, the press release states.

The portrait will be available to view in person at the University of Cambridge’s Fitzwilliam Museum for an initial period of three years, after which it will be shown in other galleries and community spaces in Cambridgeshire, according to the press release.