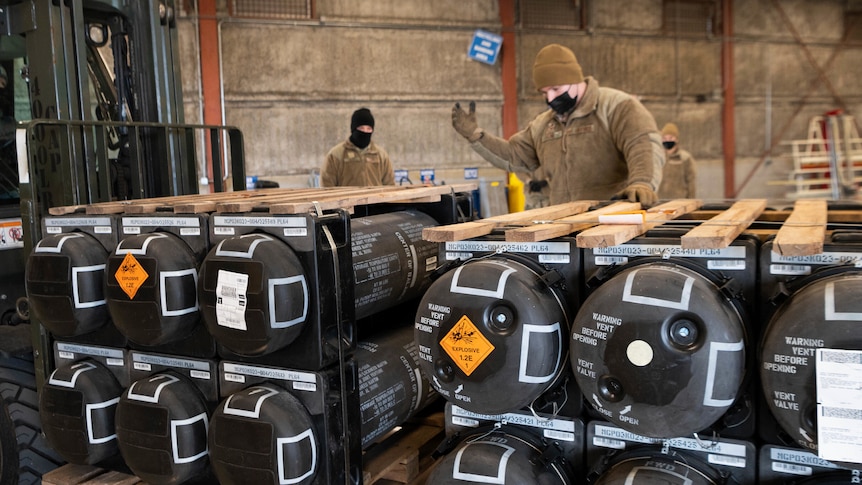 The war in Ukraine is now over 100 days old, displacing an estimated 13 million Ukrainians with no end in sight.

But the Ukrainians have so far held on to large parts of the country, largely because of weapons sent in from the West that bolstered the army to give it a fighting chance against the Russians.

While Australia has sent $200 million worth of Bushmaster weapons and vehicles, this is only a fraction of the amount of military aid committed by the United States.

According to the Center for International Policy (CIP) – a US-based group that monitors US military spending and weapons – Congress has approved $54 billion ($70 billion) in aid to Ukraine since the February 24 invasion.

Tracking down weapons spilling into Ukraine

The billions of dollars in foreign weapons sent to Ukraine have given them a fighting chance against Russia, but could they fall into the wrong hands?

Space to play or pause, M to mute, left and right arrows to search, up and down arrows for volume.

“When you think about comparing that to other parts of the US budget, the budget of our space agency, NASA, is only $24 billion ($35 billion).”

“We’ve only allocated $1 billion ($1.44 billion) for climate finance, which is having really big effects in countries around the world.”

The United States last week pledged an additional $1 billion ($1.44 billion) in arms and aid to Ukraine, amid an urgent plea from Kyiv for more advanced weapons.

The new package was announced after a meeting with allies at NATO headquarters in Brussels and includes a longer-range artillery commitment and for the first time anti-ship missile launchers.

“I am grateful for this support. It is particularly important for our defense in Donbass,” he said after the announcement.

According to CIP, $26 billion ($37 billion) of the total funding was spent on military aid alone. This includes an increase in lethal aid, which translates into helicopters, drones, high mobility artillery rocket systems, howitzers, javelins, rifles and ammunition.

“This is certainly the largest amount of aid the United States has provided to any country, and certainly even more than the aid we sent to Afghanistan at the height of reconstruction. “said Ms Homestead.

She noted a turning point in April when the United States began transferring weapons that required training by American soldiers.

“And so that kind of commitment to send that equipment and to send that training showed an escalation in how the United States was looking at the kind of support they were going to provide to Ukraine,” she said. declared.

The US Congress has passed two bills allowing President Joe Biden to rapidly supply and lend weapons to Ukraine.

Congress in March approved an emergency funding bill for Ukraine, which included traditional foreign and military aid, while a second $40 billion ($58 billion) bill was voted down. adopted in May.

What happens to the weapons?

Sen. Rand Paul of Kentucky attempted to amend the second bill, requiring an inspector general to oversee weapons spending and deployment. He failed, with congress approving the bill without him.

“There are a lot of risks and implications when sending weapons to a war zone, especially this huge amount in an emergency situation.

“There are a lot of concerns about tracking and making sure these weapons end up where they’re supposed to belong and don’t fall into the wrong hands.”

The CIP is also concerned about the possibility of arms trafficking.

“Ukraine in particular has a history of illicit arms trading which really took off in the 1990s after the fall of the Soviet Union. And those weapons were in Ukraine and actually ended up all over the world” , Ms. Homestead said. .

So far, the US Congress has approved funding through September.

“I certainly know the amount of weapons and also the amount of humanitarian aid, the refugee aid we’ve provided to Ukraine so far has certainly made a huge difference,” Ms Homestead said.

“Actually, I’m not quite sure about the prospects for longevity. [of the war] if we were to cut aid.”

The United Kingdom, Germany, Canada, Belgium and France are also among the countries that have supplied Ukraine with weapons and military equipment.