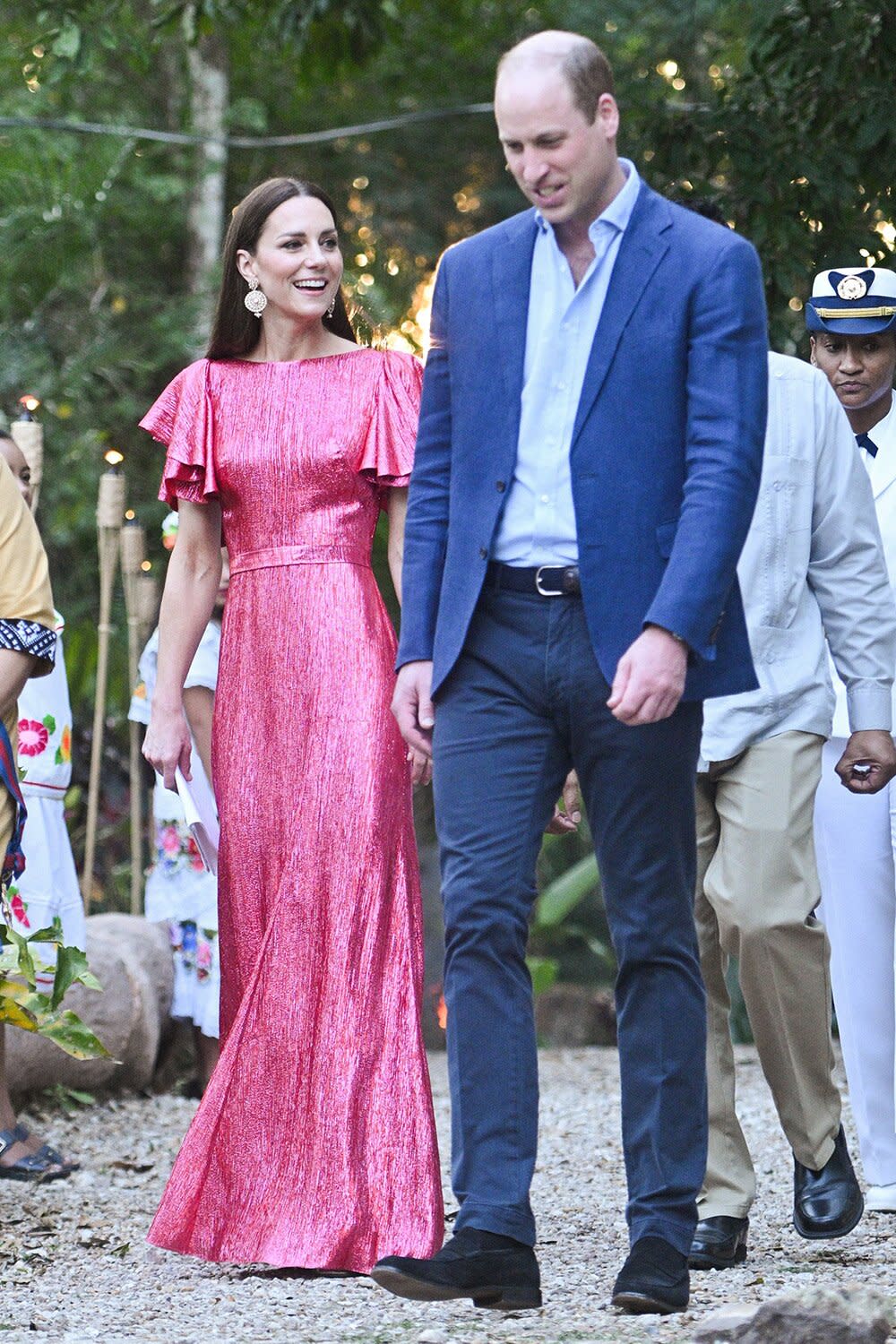 Kate Middleton and Prince William attended a special party at the Mayan ruins of Cahal Pech on the final night of their visit to Belize on Monday.

The Duchess of Cambridge, 40, debuted her first glamorous look of the couple’s Caribbean tour in a hot pink shimmering metallic gown with ruffled sleeves by the British brand, The Vampire’s Wife, while William, 39, opted for a blue suit. Kate traded in her usual voluminous blowout for a sleek style with her hair parted down the middle. She accessorized her look with statement earrings and an embroidered Mayan clutch.

The event, which was hosted by the Governor-General of Belize and also attended by Prime Minister Johnny Briceño, is in celebration of Queen Elizabeth’s Platinum Jubilee, which marks her record-breaking 70 years on the throne.

The couple was greeted with cheers as they arrived at the reception, which celebrated the very best of Belizean culture.

The Duke and Duchess of Cambridge met with community leaders, well-known Belizeans, and members of the government throughout the evening.

William also gave a speech, telling guests: “Catherine and I are delighted to be here with you tonight in Belize at the beginning of our first official visit to the Caribbean. You could not have chosen a more beautiful and evocative setting, here at Cahal Pech.”

“Earlier today we also had the chance to visit the extraordinary ruins at Caracol, deep in the jungle, and marvel at the ingenuity of your Mayan ancestors,” he continued. “These sites are a testament to Belize’s long and proud history and culture. And climbing up all those steps is very good exercise!”

He also recalled his grandmother Queen Elizabeth’s trip to Belize in the ’90s: “I am honored to convey the very warmest wishes from my grandmother, The Queen of Belize, on the occasion of her Platinum Jubilee. She always speaks so fondly of her visits to Belize, which of course included a memorable stop here at Cahal Pech in 1994.”

He continued, “Yesterday we also had a taste of Belize’s wonderful cultural diversity — from Mayan chocolate to Garifuna drumming. And yes, you even got us dancing! Belize may be small, but your rich blend of ethnic groups contributes to the harmonious tapestry of life.”

He went on to praise Belize’s support for the people of Ukraine and their response to the COVID-19 pandemic.

“Belize has joined many others in condemning the invasion and standing up for the principles of international law, peace and security,” William said. “Today we think of those struggling in Ukraine and we stand with them in solidarity.

“The last two years of the COVID-19 pandemic have been hugely challenging, but it is reassuring to have heard from so many people that things are on the up. COVID rates are low, the vaccination program is going well, and it is wonderful to see the hotels filling with tourists again.”

Finally, he shared that he and Kate hope to bring their three children — Prince George, 8, Princess Charlotte, 6, and Prince Louis, 3 — to Belize one day.

“We hope to return again soon and to show our children this wonderful country,” he said. “They are rather jealous that they are not here with us now!”

Earlier in the day, William and Kate played tourists as they took in the ancient Mayan ruins of Caracol in the Chiquibul Forest where they learned about the history and were taken to the stunning Caana (“sky palace”).

On Tuesday, they head to Jamaica and then on to the Bahamas on Thursday.

William and Kate’s tour has already been met with controversy. Over the weekend, they were forced to cancel one of the first stops during their visit to Belize after protests broke out ahead of the couple’s arrival.

The Duke and Duchess of Cambridge had planned to visit a cocoa farm in the foothills of the Maya Mountains in Belize on Sunday, but that was canceled after villagers staged a protest about colonialism and the use of a football field by the royals for landing their helicopter.

Villagers in Indian Creek were photographed on Friday with signs saying, “Prince William leave our land.”

The couple will reportedly face another protest as they travel to Jamaica.

Can’t get enough of PEOPLE‘s Royals coverage? Sign up for our free Royals newsletter to get the latest updates on Kate Middleton, Meghan Markle and more!

According to The Independent, a protest calling for slavery reparations has been scheduled in Jamaica’s capital city of Kingston. As the country marks its 60th anniversary of independence, a planned demonstration is due to take place on Tuesday — the same day the Duke and Duchess of Cambridge arrive in Jamaica.

The protest has reportedly been arranged by the Advocates Network, a human rights coalition of Jamaican activists and equalities organizations. The coalition has also written an open letter signed by major figures in Jamaica calling for the British monarchy to pay slave reparations.