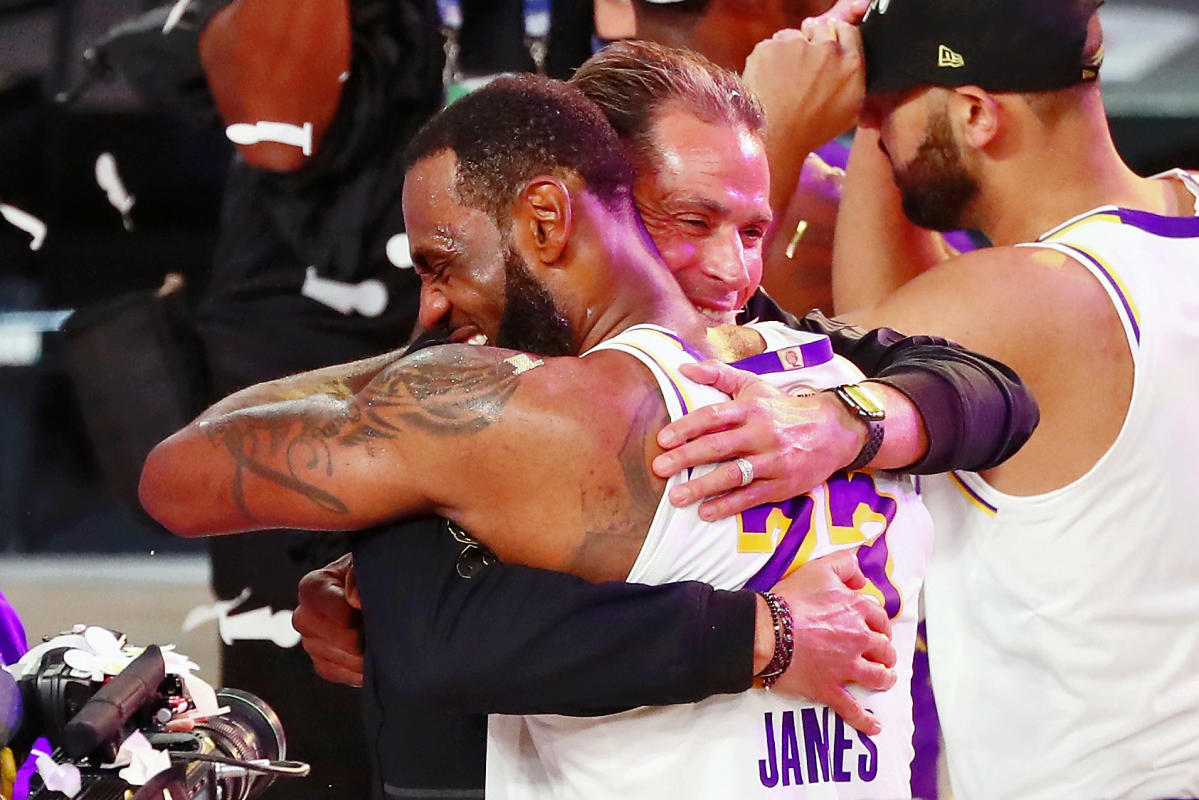 Where smoke surrounds LeBron James, there is always fire, and the Los Angeles Lakers are burning.

Whenever James has been dissatisfied in his career, whether he tells us directly or lets anonymous sources do the informing, whispers become louder right before a momentous change reverberates around the NBA. We have seen James spin this cycle through Cleveland, Miami, back to Cleveland and now in Los Angeles.

It should come as no surprise, then, that James has made headlines during the NBA’s All-Star break, as his sub-.500 Lakers are languishing in ninth place and he nears the final year of his contract. The only thing left to wonder is what the franchise will look like when the other shoe drops between now and next season.

Smoke first smoldered in 2005, when the Cavaliers were on the verge of missing the playoffs for the second time in as many years since drafting James. News of his unhappiness in Cleveland turned to reports that he could either seek a trade before his rookie contract extension came due in 2006 or accept a qualifying offer to become an unrestricted free agent in 2007. He was linked to the New York Knicks, via Spike Lee, and the New Jersey Nets, via Jay-Z, to the point new Cavs owner Dan Gilbert felt compelled to address the rumors.

Cavaliers general manager Jim Paxson panicked at the 2005 trade deadline, acquiring Jiri Welsch for the first-round pick that the Boston Celtics would turn into Rajon Rondo a year later. Cleveland collapsed, and inside of three months, Paxson, coach Paul Silas and James’ agent, Aaron Goodwin, were all out of a job.

We did not learn until later that James, Dwyane Wade and Chris Bosh had begun plotting their partnership as early as 2006, when they played in the World Championships and signed abbreviated extensions, but the smoke started billowing long before James fled Cleveland in 2010. Teams were clearing cap space to pursue James for years. He all but declared in November 2008 that he would leave the Cavaliers if they could not deliver him a title. By November 2009, Pat Riley was openly recruiting James to the Miami Heat.

It depends on who you ask why a deal for Amar’e Stoudemire fell through at the 2010 trade deadline, but Cleveland GM Danny Ferry pivoted to Antawn Jamison at James’ behest. Cavaliers coach Mike Brown was challenging James during games to play defense a month later, and James ultimately responded by leading a mutiny in the 2010 Eastern Conference semifinals. Brown concedes that James likely played a role in his firing after that season, and Ferry resigned shortly thereafter, essentially leaving the franchise to James.

Only, James left for South Beach that summer. By November 2010, when his newly established Heat were hovering around .500, he was suggesting Riley should replace coach Erik Spoelstra. Riley would not relent.

Consecutive titles in 2012 and 2013 resulted, sandwiched around James’ public embrace of a possible return to Cleveland. He would not directly address his looming free agency prior to the ensuing season, when he was reportedly already exploring the possibility of rejoining the Cavaliers behind the scenes. Word leaked that the Lakers would also pursue him and Carmelo Anthony before a 2013-14 campaign in Miami that Wade likened to “a bad marriage.” The Heat predictably felt James checked out of the 2014 Finals.

A week after Riley challenged James in his exit interview not to “find the first door and run out of it if you have an opportunity,” James made it clear that he wanted the Heat to draft Shabazz Napier. They obliged, trading up to get the UConn point guard, but when Riley met with James nine days into 2014 free agency, the Heat president knew “the meeting wasn’t sincere.” We should have seen the writing on the wall when Gilbert deleted his open letter lambasting James’ 2010 free-agency decision soon before his 2014 choice.

James announced his return home on July 11, 2014, making clear No. 1 pick Andrew Wiggins was not part of his plans in Cleveland. James also signed the first of a series of short-term contracts to ensure he could leverage his smoke into fire at any point during his second stint with the Cavaliers. And he sure did. A lot.

Even in the months before his Cavs won the 2016 championship, James publicly shared his desire to play with friends Anthony, Wade and Chris Paul. Multiple reports indicated that Kyrie Irving became convinced that James wanted him traded for Paul after the 2016 Finals, and when James again pushed for a swap of Irving and Paul George a year later, Irving asked out of Cleveland. In between, James demanded, “We need af***ing playmaker,” and Griffin responded by signing a 32-year-old Deron Williams off the scrap heap.

Griffin left the Cavs in the 2017 offseason, later admitting of building around James, “Everything we did was so inorganic and unsustainable and, frankly, not fun. I was miserable. Literally the moment we won the championship I knew I was gonna leave. There was no way I was gonna stay for any amount of money.”

James would not commit to re-signing with the Cavaliers beyond the final year of his contract in 2017-18, so incoming GM Koby Altman flipped Irving for a top-10 draft pick, Jae Crowder and the expiring contract of injured two-time All -Star point guard Isaiah Thomas in August 2017. James disapproved of the deal, and by the 2018 trade deadline, Altman was desperately trying to appease an unhappy James, reshaping the entire roster, apparently unaware of the breadcrumbs James had begun dropping en route to Los Angeles.

James’ commitment to the Lakers on the first day of free agency in 2018 only confirmed a year’s worth of leaks about his pursuit of a life on the West Coast. In his first season on his third team, he openly criticized his inexperienced teammates, pushed to trade them for Anthony Davis and privately called for coach Luke Walton’s firing. Magic Johnson stunningly stepped down as team president at season’s end, citing his lack of enjoyment in the job and specifically referencing the impending dismissal of Walton as a real bummer.

New Lakers GM Rob Pelinka promptly traded the team’s future for Anthony Davis, and James rewarded them with a championship in 2020 and his signature on a two-year contract extension through June 2023.

Within a year, James urged the Lakers to trade the rest of their depth for Russell Westbrook. When that predictably failed, he called for more moves at this month’s deadline. When none came, James used All-Star Weekend to put the Lakers on notice — again. Just as he had done in Miami and twice in Cleveland.

A scythe has been looming over coach Frank Vogel all season. James heaped praise on Oklahoma City Thunder GM Sam Presti last week amid reports that Pelinka had rejected the superstar’s proposal to trade Westbrook and a first-round pick for disgruntled former All-Star point guard John Wall. James also told The Athletic’s Jason Lloyd over the weekend, “The door’s not closed” on a potential return to Cleveland, and he plans to play for whichever team might draft his son Bronny as early as 2024, when James will turn 40.

Change is coming in Los Angeles. The call to deal Westbrook will reverberate for the rest of this season. The Lakers will have two first-round picks to attach to his expiring contract in hopes of satisfying James’ roster demands this summer. Hot seats are burning under Vogel and Pelinka. NBA folk are even speculating that they should trade Davis. The Lakers will surely look nothing like their current iteration in six months.

Owner Jeanie Buss liked Magic. She likes Pelinka. The jury is out on Vogel. She knows as well as we do that James helped make this bed. She will have to decide if she is willing to cede her family business to James for as long as he is in LA, or whether — like Riley, the former Lakers coach — she will challenge him to make it work without cycling through executives, coaches and teammates until the clip is empty.

We know how that worked out for the Heat. Even if the Lakers do mortgage everything for one more shot to satiate James before he can enter unrestricted free agency at age 38 in 2023, there is no guarantee he does not orchestrate another exit, because history tells us where there is this much smoke, there is always fire.

is a staff writer for Yahoo Sports. Have a tip? Email him at or follow him on Twitter!