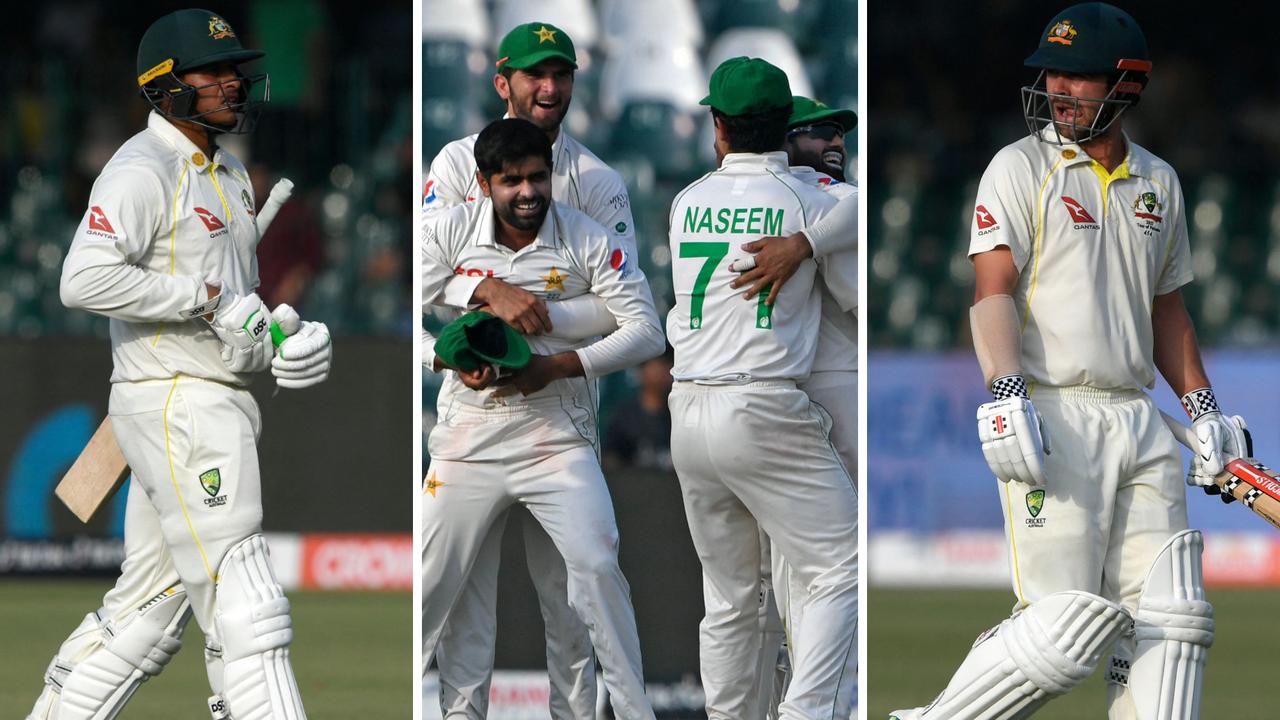 Australia lost three big wickets in the final session of day one to leave the third and final Test against Pakistan finely balanced.

The tourists had recovered from losing 2-8 in the first three overs in Lahore to reach 2-146, courtesy of a big partnership between Usman Khawaja and Steve Smith.

This Test appeared to be following a familiar script after bore draws in Rawalpindi and Karachi, but the departure of Smith after tea, and the performance of 19-year-old quick Naseem Shah, has seen this series finally come alive.

‘I’VE NEVER SEEN THAT BEFORE’: Hilarious blow-up proves Steve Smith is not human

Australia’s run rate slowed to a crawl and Pakistan pounced, also stopping the in-form Khawaja for 91 before Travis Head was caught behind for 26 making it a big triple blow for the Aussies.

Cameron Green and Alex Carey then saw out the nervy closing moments of day one to reach stumps unbeaten.

The star of the day was Shah who trapped Smith (59) lbw with a brilliant delivery that moved back into the right-hander, whose century drought stretches on despite yet another half century.

Shah had the old ball reverse swinging late and added the scalp of Head (26), who failed to find any rhythm and is yet to make a score of note this series.

Sajid Khan dismissed Khawaja who attempted to flick through mid-wicket but edged to the slips where Babar Azam took a stunning one-handed catch.

Australia won the toss and batted on a brownish Gaddafi Stadium pitch with some live grass.

Shaheen Shah Afridi had Australia in trouble at 2-8 in the third over of the innings when he trapped David Warner lbw for seven and then had Marnus Labuschagne edge behind to wicketkeeper Mohammad Rizwan for a duck two balls later.

The three-match series is tied at 0-0 after the Tests in Rawalpindi and Karachi ended in draws.

Earlier, the 21-year-old Shaheen was proud with the new ball, troubling the batsmen with skidding deliveries during an incisive five-over spell of two wickets for 17 runs.

Australia is unchanged from the second Test while Pakistan brought in fast bowler Naseem Shah for all-rounder Faheem Ashraf.

The match marks the return of Test cricket to Lahore for the first time since the 2009 terror attack on the Sri Lanka team bus.

Those attacks forced Pakistan to play their home matches abroad, mostly in the United Arab Emirates.

Australia are touring Pakistan for the first time since 1998, having previously refused to play in the country because of security fears.

CLICK HERE IF YOU CANNOT SEE THE BLOG ABOVE