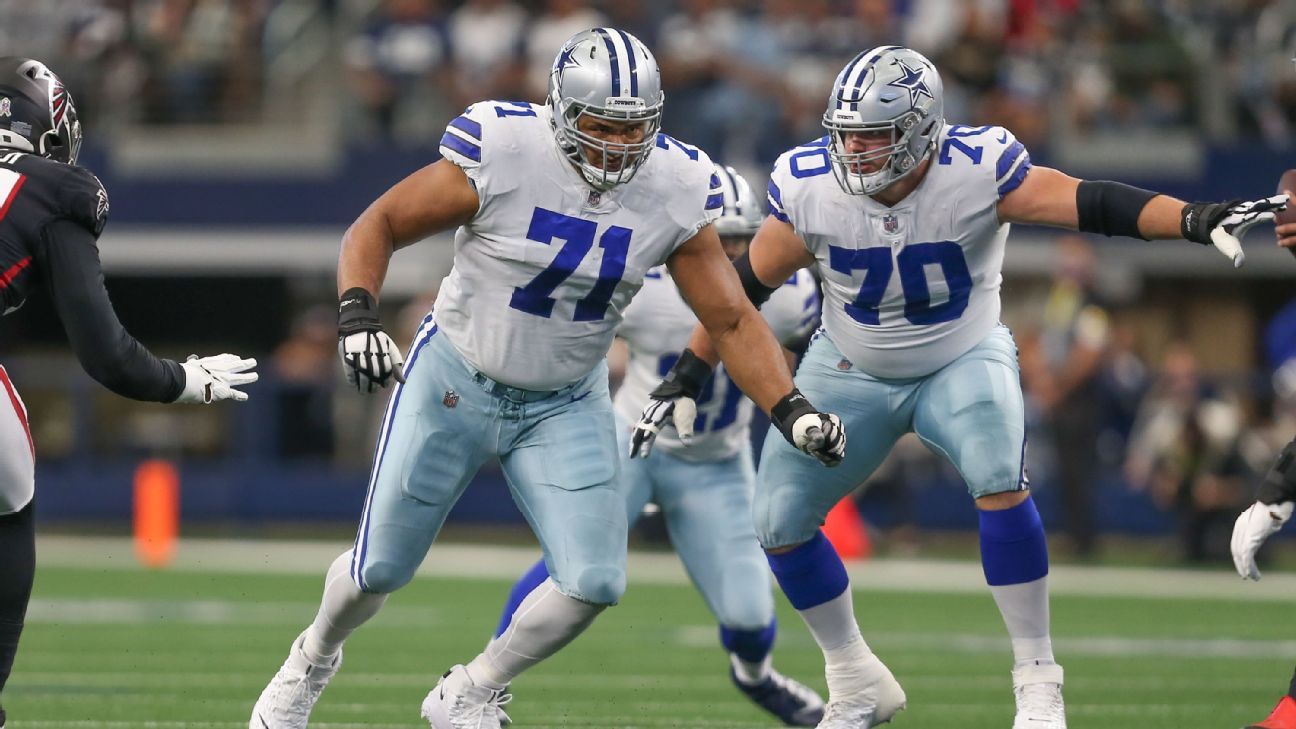 The 2022 NFL free agency deals are just now starting to slow down, but a handful of the top names are still on the market. Numerous playmakers and impact talents have agreed to terms for 2022 and beyond, and we’ve seen some wild movement on the trade market, especially under center. Which moves stand out so far, and what have we learned from a week of players headed to new teams?

The Jaguars came out of the gate with their wallet open. The AFC West turned into a race to the top with big-name signings and trades. Teams with glaring issues attacked their weaknesses with savvy deals. Some of the NFL’s top teams made moves that could put them over the top, while others quietly made smaller impact signings. Who is leading the way so far this offseason?

Our expert crew weighs in on free agency, including the most improved teams. We will update this file all week with a new question each day, hitting top signings, biggest head-scratchers and top bargain deals. Let’s dive in on our reactions to this offseason’s free-agent frenzy.

Which is the most improved team after free agency and other moves over the past two weeks?

Stephania Bell, NFL analyst: Cincinnati Bengals. They might not have made the sexiest moves, but the offensive line was perhaps the main thing that stood between them and a Super Bowl victory. Quarterback Joe Burrow was sacked a league-high 51 times last season. Teams went 16-34 last season when pressured on at least 42% of dropbacks, and the Bengals’ Super Bowl loss was among them (42.9%). The addition of right tackle La’el Collins — Burrow’s new self-proclaimed bodyguard — and interior linemen Ted Karras and Alex Cappa might be just what’s needed to put them over the top in 2022.

Mike Clay, NFL analyst: Los Angeles Chargers. There are plenty of good options here, but I’ll give the nod to the Chargers for their success in surrounding young QB Justin Herbert with a much better supporting cast. Cornerback JC Jackson and edge rusher Khalil Mack are among the best in the league at their respective positions. Los Angeles’ run defense was atrocious last season, so defensive tackles Sebastian Joseph-Day and Austin Johnson were much-needed improvements up front. Re-signing receiver Mike Williams and adding tight end Gerald Everett help the cause on the offensive side.

Tristan H. Cockcroft, fantasy football writer: Los Angeles Chargers. They rolled on offense in 2021 but were severely lacking on defense, having surrendered the 10th-most yards and fourth-most points. It was probably the primary reason they just missed the playoffs. But the Chargers have done quite a good job upgrading that area, with the additions of Mack, Jackson, Joseph-Day and Johnson. And re-signing Williams and keeping the offensive parts in place certainly helps, too.

Jeremy Fowler, national NFL reporter: Las Vegas Raiders. A team on the cusp just added the necessary players to make a serious run. The Davante Adams trade elevates the entire offense, and Chandler Jones is a Hall of Fame-level edge rusher. With Jones taking Yannick Ngakoue’s spot opposite Maxx Crosby, the Raiders flipped Ngakoue for Rock Ya-Sin, an intriguing 25-year-old corner with untapped potential. The Raiders got a lot better, and the AFC West will notice. Now, about addressing that offensive line …

Dan Graziano, national NFL reporter: Jacksonville Jaguars. You can argue with some (if not all) of the contracts, but you can’t say the Jaguars aren’t working to get better in free agency. They landed a top guard in Brandon Scherff, a starting cornerback in Darious Williams, two key defenders who drew interest from other teams in Foyesade Oluokun and Folorunso Fatukasi. I don’t know exactly how the pass-catcher situation shakes out with new guys Christian Kirk, Zay Jones and Evan Engram in the mix, but the receivers they had last year weren’t lighting the world on fire. Plus, factor in a dramatic upgrade at head coach. I don’t think the Jags are ready to compete with all of those AFC heavyweights, but after a 3-14 mess, I expect them to be at least a lot better than they were.

Eric Moody, fantasy football writer: Cincinnati Bengals. They added offensive linemen Collins, Karras and Cappa to help protect their quarterback franchise. And considering the other offensive playmakers on the Bengals’ roster, tight end Hayden Hurst — on a one-year deal — will be a mismatch for opponents.

Matt Miller, NFL draft analyst: Denver Broncos. The trade for quarterback Russell Wilson will receive the most attention (and rightfully so), but adding to an already impressive defense by signing edge rusher Randy Gregory and defensive tackle DJ Jones could make the Broncos a legitimate AFC West contender.

Jordan Reid, NFL draft analyst: Los Angeles Chargers. Having a quarterback on a rookie deal, as the Chargers do with Herbert, is a big roster-building asset. It helped them sign Williams to an extension. But their most impressive moves mostly came on defense. Trading for Mack and signing Joseph-Day and Jackson provided upgrades in key spots. The AFC West is going to be a battle week in and week out, and the Chargers have improved significantly on the defensive side to help complement an explosive offense led by their ascending star under center.

Kevin Seifert, national NFL reporter: Baltimore Ravens. I thought about the Browns but wondered how much quarterback Deshaun Watson will impact them considering he could serve a suspension. The Broncos made the Wilson deal goal play in the toughest division in football. The Ravens, meanwhile, have addressed big needs with good players — safety Marcus Williams and right tackle Morgan Moses, among others — and should be right back in the AFC North mix this season.

Mike Tannenbaum, NFL front office insider: Cleveland Browns. The dramatic upgrade at quarterback overshadows everything else. Watson gives them a chance to meaningfully compete for a Super Bowl each year that he stays healthy. An improvement at receiver with Amari Cooper replacing Jarvis Landry makes Cleveland’s offense even more difficult to stop, considering that it already has playmakers around Watson and Cooper in tight end David Njoku, running back Nick Chubb and running back Kareem Hunt.

Seth Walder, sports analytics writer: Denver Broncos. The upgrade from Teddy Bridgewater/Drew Lock to Wilson outpaces any gains made by other teams and instantly transformed Denver from non-contender to contender.

Field Yates, NFL analyst: Denver Broncos. The additions of Gregory and Jones help fortify an already rock-solid defensive front seven, but the trade for Wilson is what cements Denver as the pick here. No team has been the subject of more “if only they had a quarterback” conversations than the Broncos. They should feel confident they now have one who can lead them to a Super Bowl.