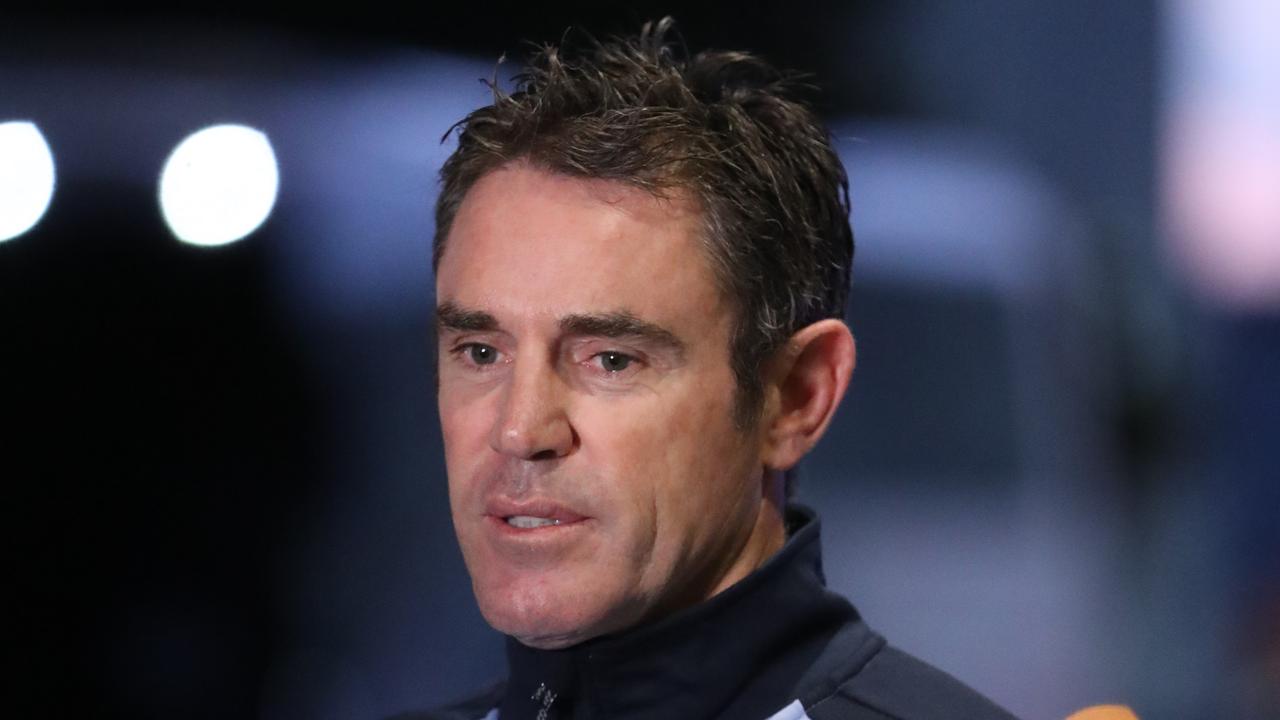 Rabbitohs star Latrell Mitchell has revealed he will never be able to star in Game II of the Origin series.

Mitchell returned from America after a five-day camp in the United States with specialist Bill Knowles, hoping for a long-term solution to repair a torn tendon in his left hamstring.

Upon his return, he contracted Covid, ruling him out of the Souths clash against the Dragons.

“I wasn’t close at all,” Mitchell told 9News.

“It wouldn’t have been fair to me if I ended up playing this week. I just wanted to prepare properly and prepare well for South Sydney. It’s my choice, not the club’s or anyone else’s.

“Good luck to the boys and I hope they get the job done. If they do, I will definitely be keen to negotiate position places for Game 3.

“I push for [my return]. Definitely for the Souths fans at home, be patient, I know you have been. I am enthusiastic. Honestly, I’m (champing) on ​​the bite.

ORIGIN: Storm Gun gets FOUR assists as NSW beat QLD in U19 clash

Blues legend Mark Geyer thinks Queensland’s decision to leave the Gold Coast for Perth on Thursday could come back to haunt them.

Brad Fittler’s team traveled to Western State on Monday, allowing them to acclimate to the weather and change their sleep habits in time for Sunday.

“The fact that Queensland only left yesterday worries me a bit because they’re cutting it well to acclimatize, not just the weather there, but the two hours they have behind it,” Geyer said. on Triple M.

“I spoke to a few New South Wales players at the start of the week and they were really having trouble sleeping so it could hit Queenslanders early on, especially the debutants.”

There were also big differences in the two teams’ preparations for the crucial Game 2 clash.

The Maroons spent the start of their week recuperating, while the Blues had lengthy sessions scheduled for Tuesday, Wednesday and Friday.

Queensland powerbrokers also chartered a private jet to fly the team to Perth, while the Blues traveled as they normally would.

At Wednesday’s NSW open session, according to SEN’s Michelle Bishop, everyone present was shocked by the intensity of the training.

“They were just too nice (in the first game) and nice doesn’t belong in the Origin Arena,” Bishop said.

“Their session yesterday was out of this world. It was brutal.

“Some journalists left wondering what they had just seen.

“It was so competitive and it certainly didn’t feel like a practice session.

“I’m surprised no one was hurt. It was complete.

THE DECISIONS THAT SMOKED THE BLUES

It has been revealed that the Blues complained about five refereeing decisions after being upset by the Maroons in the series opener.

Queensland enjoyed the rubbing of the green in Sydney, but five lineball calls could be found by reviewing any rugby league game, and at least three of NSW’s complaints were 50-50 calls .

The other two were split-second decisions that reflect the human nature of officiating. Ashley Klein was reappointed to referee the second game in Perth this Sunday.

The Blues wanted an explanation for Klein’s subsequent calls in the series opener, according to SMH.

– Kurt Capewell leaves the marker early to put pressure on a kick from Cleary.

– Patrick Carrigan tackles Cleary late after the kick in the second half.

– Kalyn Ponga earned his team a set seven tackles despite jumping off the field of play and into in-goal to catch a kick from Nathan Cleary.

– A penalty for Selwyn Cobbo being over the sideline when referee Ashley Klein called despite the momentum seemingly never stopping.

NRL referee boss Jared Maxwell – to whom Blues manager Brad Fittler spoke to about his concerns ahead of Game 1 – had no hesitation in appointing Klein for Game 2.

Queensland manager Darren Lockyer has hinted there may be late changes to the Maroons’ starting squad ahead of Game II on Sunday.

The Immortal Wally Lewis asked Lockyer if Ben Hunt would start at hooker again with Harry Grant coming off the bench.

Lockyer seemed taken aback by the question before revealing that coach Billy Slater could be set to tinker with the 17 named this week.

“Well yeah, there might be some late changes,” Lockyer said on WWOS.

But Lockyer was quick to point out that the Maroons coaches were happy with the way Hunt and Grant combined to win in the opener.

“The concept is that Ben (Hunt) takes the sting out of the game and lets Harry come in and do his thing – and he was very good in the first game,” Lockyer said.

The panel also discussed whether Patrick Carrigan – who nearly won man of the match off the bench in Game 1 – would start.

“Sometimes when I come to these big games, I look at the bench first before looking at 1-13, because the bench plays a big part in the…outcome of the game,” Lockyer said.

“Our bench was a really, really good first game, and I think Billy thinks Carrigan was so good (because he) came off the bench, (and) he wants the same effort or the same impact.”

FREDDY TO TAKE THE BLAME

NSW Blues manager Brad Fittler must take responsibility if his substitution host fails to produce a win against Queensland in State of Origin Game II on Sunday.

This is the point of view of The telegraph of the day‘s Paul Crawley after Fittler made big changes to his team following a 16-10 loss in the series opener.

According to Crawley, Fittler was his team’s biggest critic and his drastic changes are an admission that the selectors got it wrong in the first place.

“They made a lot of changes, considering they were down by six points, I think it’s an admission that NSW got it wrong,” Crawley said on NRL 360.

“I think Billy definitely outclassed him, NSW admitted through his team selections for Game II that he was wrong.

“NSW’s biggest critic has been their own manager, as he was the one who spent months finalizing their first team.

“But if they don’t aim this time, it’s Brad Fittler who has to carry the result.”

The question has been asked whether rookie manager Billy Slater has beaten Fittler, who has led NSW 13 times.

But, looking at the Queensland coaching staff, which includes Slater and Maroons legend Cameron Smith, Crawley believes NSW should have seen an ambush coming.

“You ask the question, did Billy beat him?” Of course they did,” Crawley said.

“Queensland outplayed him, they dominated, they played with more momentum, more ruck speed, the pressure they put on Nathan was key for the game.

“They came out with a plan and the plan worked, and I kind of think Billy was a first coach, so you didn’t know anything about the style he was going to come in with, other than the fact that he spent the whole his playing career in Melbourne.

‘BID AGAINST THEMSELVES’: Tigers scouting torched amid $750,000 U-turn

‘TOO NICE’: Brandy lifts the lid on why Blues made SEVEN changes for Crunch Origin II

“He has Cameron Smith on his team, you don’t have to be a genius to know what they’re going to do.”

After the game, ‘Freddy’ was disappointed with the way his side handled the Maroons’ ruck tactics and the NRL 360 panel believe the Blues should have waited for them from the start.

Meanwhile, it was revealed that the speed difference between NSW and Queensland ruck was only marginal – with 0.2 seconds separating the sides.

“I’m led to believe it wasn’t warranted (Fittler review) I’m led to believe that the speed of ruck and playing the balls in Origin I was faster than they are in a game average of the NRL and the difference between NSW and Queensland was a fraction of a second,” said Crawley.

“In maybe a dozen tackles across the game which are really critical moments in the game, that’s where Queensland have done their job on NSW, which is just smart training.

“It’s not overdoing it, it’s just doing it the right way.”

“How was NSW surprised by Queensland’s tactics? That’s the little I questioned,” Kent said.

“Queensland had recognized it early on, we saw Tino Fa’asuamaleaui staring at the referee with a player down, knowing he had seconds left,” Anasta said.

“I haven’t seen a single NSW player do that.”

“That’s the problem, why, why is NSW just finding this out in the game, Brad Fittler is on his 13th game as Origin coach, Billy Slater is on his first, Billy was aware of it, Freddy didn’t wasn’t,” Kent said.

“Jack Wighton was completely deflated to the point that they didn’t pick him up,” Riccio said.