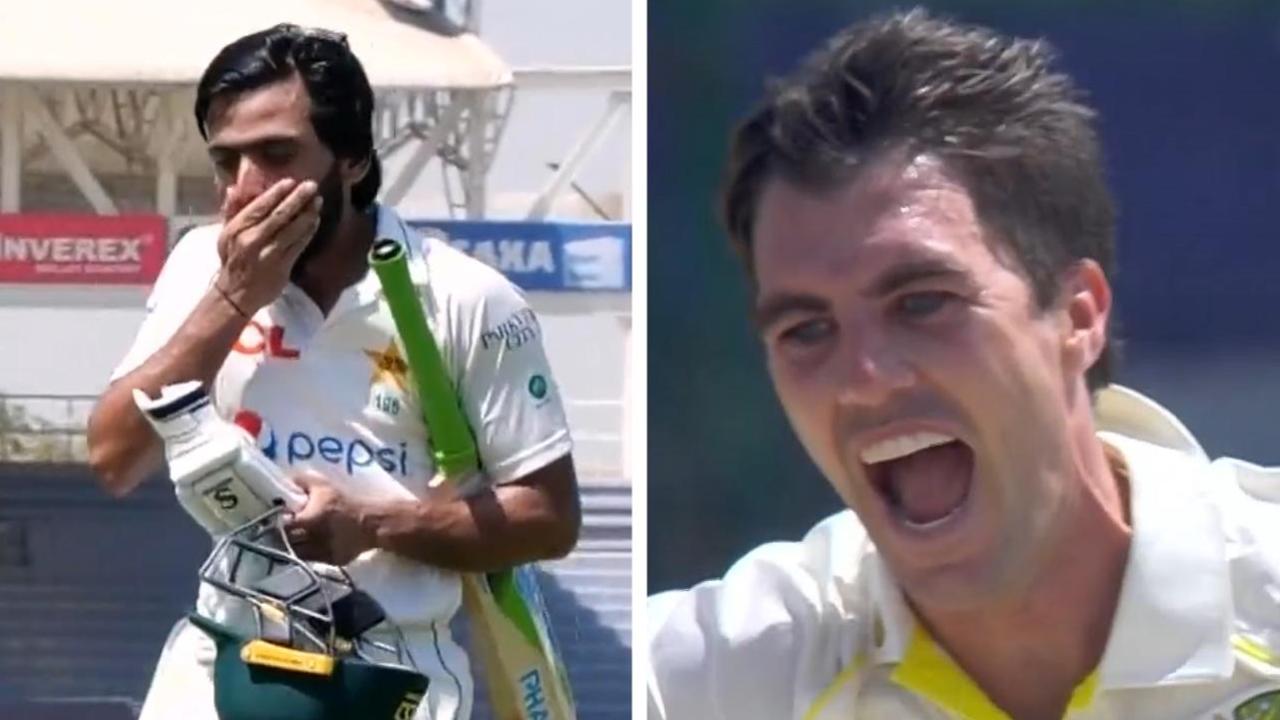 Just when Australia seemed destined for another hapless draw in Pakistan, skipper Pat Cummins brought the contest back to life.

The Karachi Test between Pakistan and Australia is approaching a climactic finish, with all four results possible ahead of day five.

Pakistan requires a further 314 runs to pull off a record-breaking victory, while the Aussies need eight wickets to take a 1-0 lead in the Benaud-Qadir series.

The hosts will heavily rely on skipper Babar Azam, who brought up his sixth Test century on Tuesday to frustrate the visitors.

Meanwhile, Australia will be hoping its quicks rediscover the damaging reverse swing that wrecked havoc on day three.

Cracks in the Karachi pitch are starting to widen ahead of day five, and Aussie tweakers Nathan Lyon and Mitchell Swepson will be eager to take advantage.

150 up for Babar, Cummins strikes again

What an impressive knock this has been.

Pakistan captain Babar Azam has passed 150 in Karachi, becoming just the third Pakistan cricketer to reach the milestone in the fourth innings of a Test match.

But the following over, skipper Pat Cummins struck again.

The Aussie quick caught the outside edge of Fawad Alam’s bat, with gloveman Alex Carey claiming a smart catch low to his left.

Alam starts for 9, and wicketkeeper Mohammad Rizwan in the new man in the middle for Pakistan.

Skipper Pat Cummins has unearthed the long-awaited breakthrough for Australia eight minutes before the lunch break, removing the Pakistan opener for 96.

The 22-year-old couldn’t resist attacking a wide delivery from Cummins, with the thick outside edge flying towards Steve Smith at first slip.

Shafique makes his way back to the pavilion after 305 deliveries at the crease, with Fawad Alam joining his captain in the middle.

Australia is still searching for its first breakthrough of the morning, with the partnership between Pakistan captain Babar Azam and opener Abdullah Shafique exceeding 200.

The odds of an Australian victory is dwindling quickly.

With the exception of the infamous 1939 Timeless Test, the longest fourth innings in a drawn Test was 165 overs, achieved by England against South Africa in 1995. If Pakistan pull this off, they would have survived 172 overs.

This is now the largest fourth-innings partnerships in Tests in Pakistan.

Pat Cummins was going hammer and tong to give Australia the best chance of winning the second Test against Pakistan.

To sort out issues on the crease where a bowler’s front foot lands, ground staff often bring out a large hammer-like object and smash that area of ​​the pitch to flatten to it.

But Cummins took matters into his own hands on day four, grabbing a regular-size hammer when the Aussies called for assistance and evening out the surface on the crease line himself.

The golden boy, who can do no wrong in the eyes of cricket lovers around the world, inspired comparisons with a Marvel superhero.

Azam and opening batter Abdullah Shafique combined for an unbeaten 171-partnership on day four to frustrate the Australians, with the pair surviving 59.4 overs at the crease on Tuesday.

Pakistan’s run chase started horrifically, with off-spinner Nathan Lyon trapping opener Imam-ul-Haq on the front pad for 1, wasting a review in the process.

Soon after, young all-rounder Cameron Green removed veteran batter Azhar Ali in bizarre circumstances, with the Pakistan No. 3 ducking into a bouncer that kept low and struck him on the torso.

But Australia’s fortune ran out just before the tea break, with vice-captain Steve Smith dropping a regulation chance at slip to gift Shafique an extra life on 20.

Chances were few and far between for Australia’s bowlers after the costly blunder — the reverse swing that rattled Pakistan’s top-order in the first innings couldn’t be replicated, and Australia’s spinners were unable to take advantage of the Karachi pitch’s cracks.

Azam brought up his sixth Test century late in the evening session, reaching the coveted milestone in 181 deliveries. It breaks a 767-day century drought for the talented 27-year-old, who last reached triple figures in the Test arena in February 2020.

Pakistan will resume on day five at 2/192, with Azam unbeaten on 102 and Shafique at the other end on 71. If the hosts were somehow able to chase down the remaining 314 runs required for victory, it would comfortably break the all-time record for highest successful run chase in Test cricket.

Australia has never won a Test in Karachi – in eight previous matches against Pakistan at the venue dating back to 1956, Australia have suffered five losses and three draws.