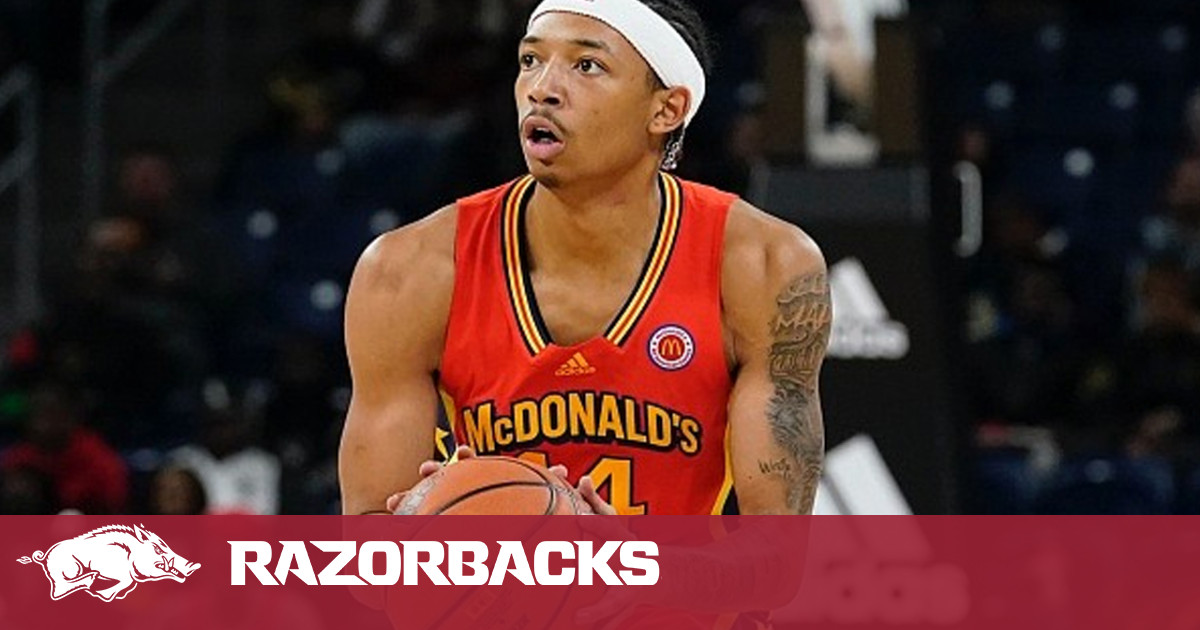 FAYETTEVILLE- Razorback signed Nick Smith Jr., has been elevated to the #1 prospect of the Class of 2022, 247Sports.com announced today.

Smith has been invited to join future Razorbacks and fellow five-stars Anthony Black and Jordan Walsh at the 2022 USA Basketball Men’s U18 FIBA ​​Americas Championship National Team training camp from May 26-June 2 in Houston. A total of 27 athletes will vie for one of 12 spots on the USA Basketball U18 National Team that will compete at the 2022 FIBA ​​U18 Americas Championship in Tijuana, Mexico, from June 6-12. Arkansas is the only school to have as many as three on the list of expected participants. Earlier this spring, Smith and Black were members of USA Basketball’s 2022 USA Nike Hoop Summit Team, which defeated Team World, 102-80.

247Sports Top150 officially released its final update for the Class of 2022 on May 11. Travis Braham of 247Sports said, “(Eric) Musselman and his staff have secured not only their best recruiting class in school history but also their highest-ranked recruit in the modern online recruiting service era in Nick Smith Jr. – the newly minted No. 1 overall player in the country. You have no choice but to take notice as the Razorback fanbase is going to be one of – if not the loudest – fanbases in the country over the next 10 months ”

Smith’s stock has risen from #5 to #1 by 247Sports thanks to his play for Team USA as well as standout performances during the weeks of the McDonald’s All-American Game and the Jordan Brand Classic. Smith joins Corliss Williamson as the highest-rated player ever signed by Arkansas. Williamson was the 1992 National Gatorade Player of the Year and was either the #1 or #2 prospect in the nation by the recruiting services.

“Smith was the best player during practices at the McDonald’s All American games, a telling feat for what is widely regarded as the most competitive practices of the year,” said Sports Illustrated’s Jason Jordan.

After being named MVP at the Jordan Classic, ESPN national recruiting director Paul Biancardi said, “He showed me a lot at the McDonald’s and then the Classic. He just comes with a mindset that it’s all business and it’s hard for kids to do that. He takes the game seriously and he’s a serious player.”