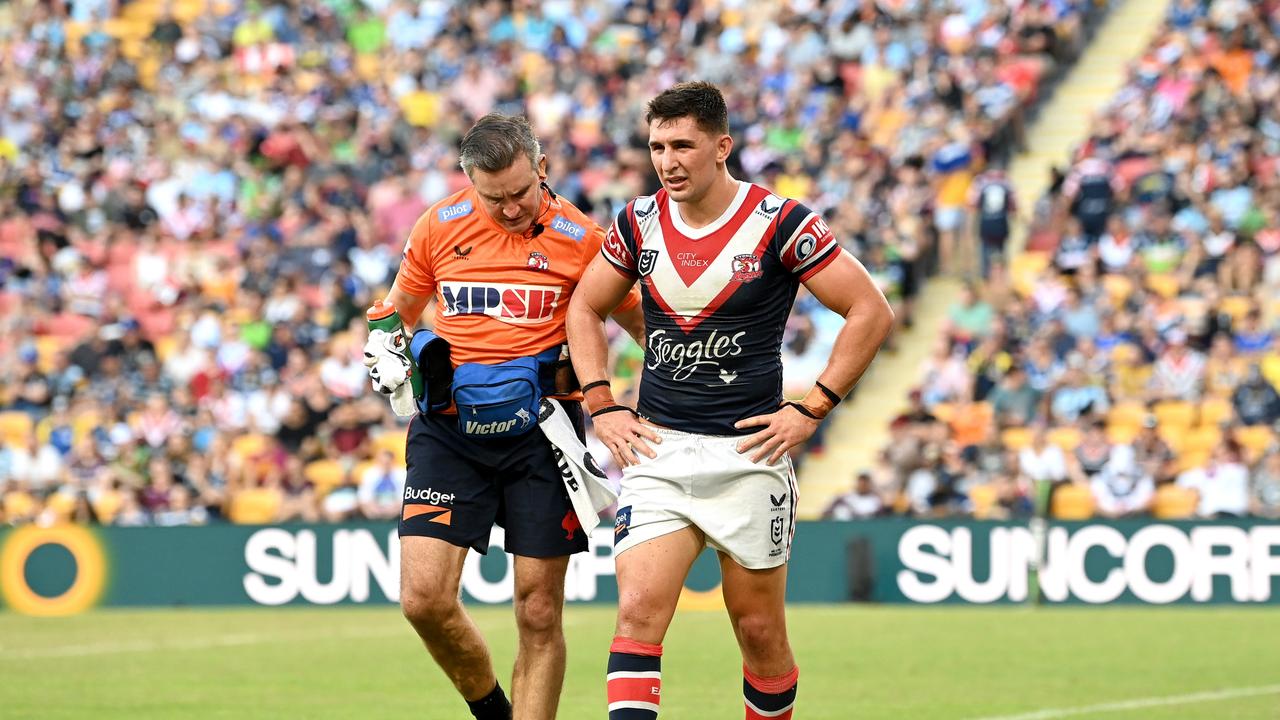 NSW have been dealt another selection blow with Roosters enforcer Victor Radley ruled out of contention for the Origin opener.

On Tuesday the Roosters confirmed Radley will miss the next seven weeks after suffering a syndesmosis injury against the Eels, which will require surgery.

Radley was tipped to be in the frame to make his debut before succumbing to the injury.

‘SURRENDERED ENTIRE OPERATION’: Why Gould painted a target on his back

CARRIGAN: Why I love seeing Milford back in NRL, even if it’s against the Broncos

Sharks captain Dale Finucane, meanwhile, is racing the clock to be fit for the Game 1 after suffering a knee injury and concussion against the Raiders.

Speaking to the media on Tuesday, Roosters captain James Tedesco said the injury was brutal timing for Radley.

“For him personally, it is not a great time to get that injury but that’s footy, I guess,” Tedesco said

“From Victor’s point of view that is disappointing. He got suspended last year for five weeks and couldn’t be chosen for Origin. He is always on the verge.

“I am pretty sure he is close to getting picked, so hopefully he gets back quick and who knows what can happen.”

The 19-year-old has gradually improved as the season has progressed, scoring a hat-trick for the Broncos during their 38-0 thrashing over the Manly Sea Eagles.

“Billy (Slater) is the boss, you never give instructions up, they come down,” Smith said on SEN 1170 Breakfast.

“I had a chat with Billy recently to compare notes and Cobbo was certainly on the radar.

“You can’t ignore the form he is in at the moment and some of the things he can bring to the football side.”

Cobbo has scored nine tries in 17 games for the Broncos since his debut in 2021 and is reportedly being chased by up to eight clubs as he decides his NRL future.

Coming off a comfortable victory against the Sea Eagles, the Broncos will be eager to claim five wins on the trot when they travel down to Newcastle for their clash against the Knights on Thursday night.

‘IN THE MIX’: Gould relationship opens door for Flanagan as next coach plans revealed

RAMIFICATIONS: Barrett’s recruits could look for the door as Dolphins swoop

Moeaki Fotuaika played all three State of Origin games in 2021 but he hasn’t had any contact with the new-look Maroons coaching staff in the weeks before this year’s series.

The barnstorming Titan made the admission just hours after new Queensland coach Billy Slater said he had uncapped Cowboys forwards Jeremiah Nanai, Heilum Luki and Reuben Cotter on his radar for Game One on June 8.

After Covid-19 concerns forced Queensland to cancel its pre-season camp, Slater chose to catch up with Origin hopefuls via Zoom.

Fotuaika was one of the players called up but said he hadn’t heard from Slater since.

“I haven’t spoken to anyone about Origin or anything like that since the start of the year,” he said.

“It was just a Zoom chat … Other than that, there’s been nothing.”

Fotuaika’s performance in Magic Round might just change that; the prop forward ran for 213 meters and made 35 tackles in Gold Coast’s golden-point defeat of the St. George-Illawarra Dragons.

Fotuaika said he was focused on keeping his form up for the Titans, not on whether he would have the chance to wear the Maroon jersey again this year.

“I don’t really think about it,” he said.

“I just try and do my job here at the Titans, just playing good footy every week.

“Everything else will take care of itself. I’m not thinking ahead, I’m just thinking about the present at the moment.”

While NSW coach Brad Fittler previously indicated Cam Murray’s replacement was likely to be someone with Origin experience, Slater seemed not to have an issue with blooding debutants in the first game of the triptych.

He said he’d taken notice of more than one uncapped Cowboy in the first ten rounds of the season.

“The Cowboys have certainly grabbed the whole competition,” he told SEN.

“Some of the younger guys in (Jeremiah) Nanai, (Heilum) Luki, Reuben Cotter and Tom Dearden are all doing a great job.

“Their more experienced players like Kyle Feldt and Valentine Holmes are thriving with the youth around them.”

Slater said every player eligible to play for Queensland would be considered for selection.

“I’ve got a list of every single Queenslander on an NRL book,” he said.

“I’m aware who the Queenslanders are and how they are playing.”

Slater said he and the rest of his coaching staff would also take prior form into account, which could bode well for Fotuaika.

“You have to earn every opportunity to play for Queensland,” Slater said.

“What you have done in the past is certainly taken into consideration.

“The actions you display each week – that’s what you are going to fall back on.

“That’s really important, the clothes that you’re building into the game.

“It will tell not just me but the selectors and everyone else in Queensland how much you want to play.”

Reece Walsh says advice from Maroons coach Billy Slater has steeled him to improve his defensive efforts and put himself in the frame for a State of Origin debut after having his dream cruelly snatched away last year.

The 19-year-old Warriors custodian, in the frame with Kalyn Ponga to wear the No.1 jersey for Queensland, was set to play fullback in game two last year when he strained a hamstring in the captain’s run.

He learned plenty from that experience about preparation and from talking to Slater about where he needed to lift.

Walsh averages approximately two missed tackles per game and wants to get it down around the one mark like the elite fullbacks in the game. James Tedesco, for example, has a missed tackle average this year of 0.9.

“I tore my hamstring in the captain’s run before Origin last year. Now, every time I get to a captain’s run I make sure I do all my stretching. I make sure my preparation is all perfect so it doesn’t happen again,” Walsh said.

“I have worked hard on my defense with Browny (Nathan Brown) and it’s an area where I have really grown.

“I have spoken to Billy and he wants me to keep growing my defensive game and to focus on myself in all areas. If I can get better each game, then I feel it is going to help, no matter what team I am playing in. That is one of the things Billy spoke to me about.”

Slater, one of Queensland’s greatest ever fullbacks, was one of the Maroons selectors last year and was prepared to back Walsh at the selection table. He’s been assisting Walsh in the background and is impressed with the teenager’s attitude.

“I have done a bit of stuff with Reece over his career and I’ve had some communication with him,” Slater said.

“I have got a lot of time for him. He’s a great young man and has a good desire to get the best out of his NRL career.

“There’s a lot that goes into that (fullback) position. We see all the shiny stuff that Reece is really good at. He highlighted that when he first hit the scene last year but he’s working on a lot of the stuff behind the scenes that teams really benefit from. He’s on the right track.”

Ponga made his Origin debut in 2018 off the bench and fired playing in the middle of the field rather than in his preferred position. Walsh said he would do the same anywhere in the 17.

“(Ponga) just went out there and played footy and I feel as though I am in the same boat. If Billy picks me, I will play anywhere for Queensland,” Walsh said.

“I feel like I have a pretty good knowledge of rugby league and I have played in a wide variety of positions before. There was one Queensland 18s game when I was coached by Kurt Richards where I came off the bench and played in the middle at lock.

“If I was to get that opportunity to wear the Maroons jersey I would do it for my family and my state. I guarantee I would leave everything on the field and would not let them down.”

Slater played with Darius Boyd, Greg Inglis and a host of other Maroons who didn’t play in their club position when they lined up in Origin.

“You go into it with an open mind and pick your best team,” Slater said.

“It’s great to have players playing in the position they are going to play in State of Origin, but I have played with a number of great players that have been able to shift around positions.”

Walsh is just grateful to have the chance to work with Slater.

“Billy was an inspirational example for me. I watched all the things he did on the paddock. It is a childhood memory of mine,” he said.

“When I talk to him now I find that he is one of the smartest people in rugby league that I have ever met. He is a terrific coach and a terrific person as well.”