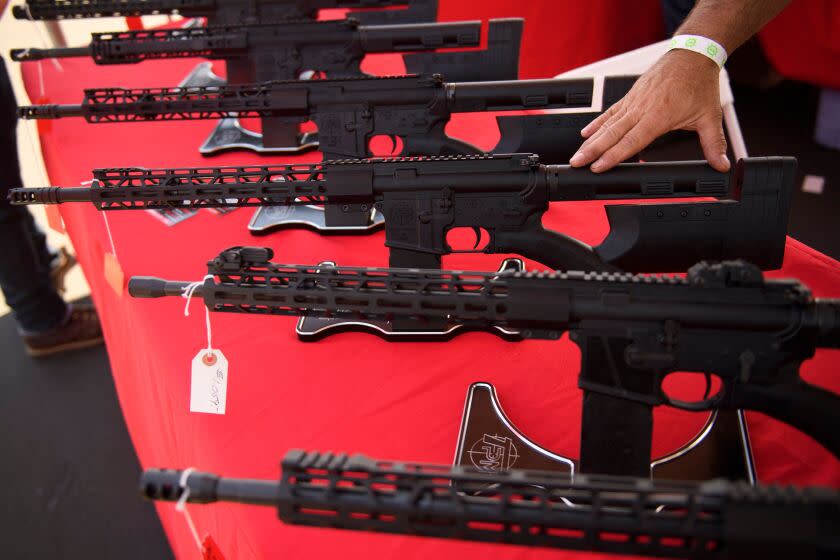 For the editor: Don’t blame the founders for our failure to curb gun violence. (“How many times has Biden said ‘We need to act’ on guns? What’s taking so long?” Opinion, May 25)

If the words that begin the 2nd Amendment—”A well-regulated militia, being necessary for the security of a free state”—were heeded, a person who wanted a gun would first have to enlist in a local militia. They took an oath never to use their weapon except to defend their home or community. The enlisted would then be required to follow the chain of command and regularly demonstrate proficiency in the care and use of their weapon.

Because our Supreme Court did not uphold the 2nd Amendment, we live in a country that is neither safe nor free.

For the editor: As an African American who is pro-2nd Amendment but reasonable about it, I have my concerns.

We tend to read the first few words quickly: “A well-regulated militia. We are individuals who interpret the 2nd Amendment as if it would work today.

That said, the militias that have formed are (mostly) in place for nefarious reasons. Racial tensions and political division in this country gave rise to armed dissident groups who would fight each other, not to mention the government.

My support for the 2nd Amendment has very little to do with taking up arms against the government. Rather, my concern is for those who might harm me or my family because of the color of our skin.

For the editor: Our founding fathers were idealistic, educated men, but they were human. To understand some of what they did, follow the money. Most of them owned slaves or benefited from the slave trade.

The 2nd Amendment has nothing to do with self-protection or fear of big government.

For the editor: I can’t imagine what all those 9 and 10 year olds and their teachers were thinking as they were held captive in their classroom, just wishing their parents would come to help and save them.

And all of you Republican congressmen should look in the mirror. During the January 6 uprising, you hid in closets, under desks, and in locked offices. You were taken to secure rooms while the officers tried to protect you from the crowd.

Did these little Texas guys have the same luck? And you still can’t vote for any type of gun control?

This story originally appeared in the Los Angeles Times.