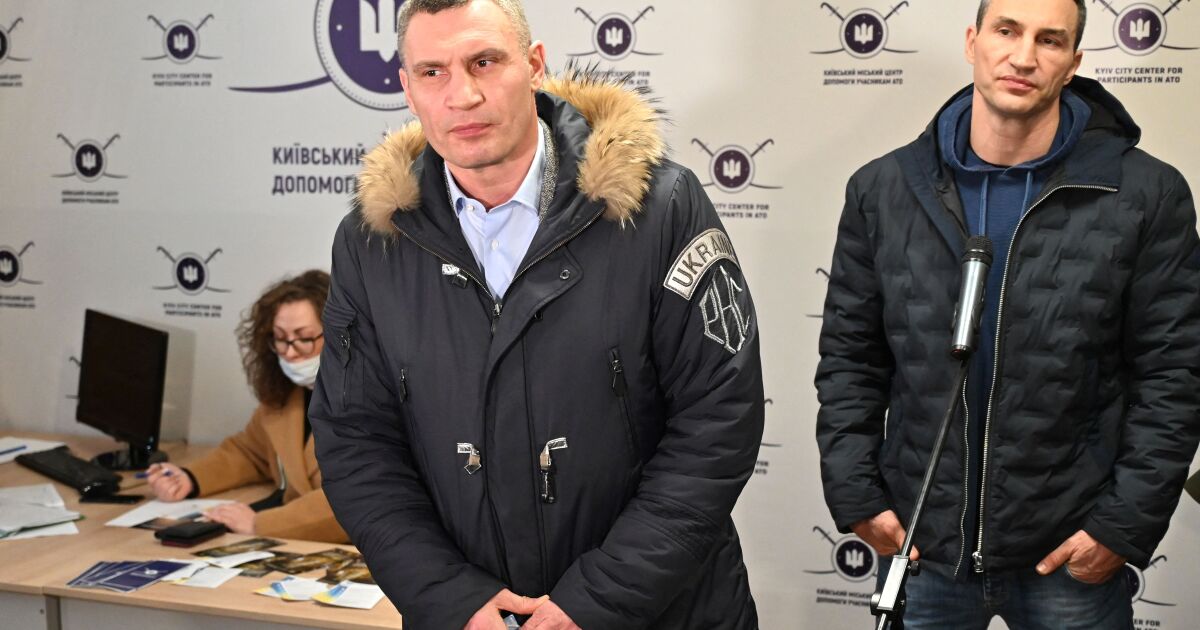 Both won several world heavyweight boxing championships, known for smooth footwork and fierce jabs. One never faced a knockdown in the ring. The other was undefeated for a decade.

Now, after Hall of Fame boxing careers, Vitali Klitschko and Wladimir Klitschko are again on the world stage, united in Ukraine’s fight against Russia’s invasion.

In the days since the assault began on their home country, both have said they plan to take up arms to defend against the Russian military as it moves closer to Kyiv, the Ukrainian capital.

On Friday, volunteer fighters patrolled the streets of Kyiv. President Volodymyr Zelensky urged Ukrainians to stand up and defend their country. The message came as Russian airstrikes began to bombard the capital city.

“Our military is here, our civil servants are here defending our independence and our state, and we mean to keep it that way,” Zelensky said.

For much of Friday, harrowing images of Ukrainians lined up to receive military weapons flooded social media, along with images of residents making Molotov cocktails.

Vitali Klitschko, 50, who since his retirement from boxing in 2013 has served as mayor of Kyiv, said in an interview on ITV’s “Good Morning Britain” that he would stay and fight.

“I don’t have another choice. I have to do that. I’ll be fighting,” he said. “It’s already a bloody war.”

“Now, the Russian president [Vladimir Putin] is using war rhetoric … he makes it clear that he wants to destroy the Ukrainian state and the sovereignty of its people,” Wladimir wrote on LinkedIn on Thursday. “Words are followed by missiles and tanks. Destruction and death come upon us. … We will defend ourselves with all our might and fight for freedom and democracy.”

The brothers have often spoken publicly about politics. For years, even before his official boxing retirement after being a heavyweight champion in three different decades, Vitali Klitschko had political ambitions, despite losing municipal elections in Kyiv.

At 6-feet-7 and 250 pounds, Vitali, with a boxing record of 45-2 that includes 41 knockouts, won the 2014 Kyiv mayoral contest and has served in the position since. It’s the same year Russia invaded eastern Ukraine and annexed Crimea.

In that time, he’s been a staunch supporter of Ukraine distancing itself from Russia and creating stronger relationships with the European Union and NATO. He’s also criticized Putin over the years.

Tom Loeffler, who runs the Klitschko brothers’ company, K2 Promotions, said he talked with Wladimir on Thursday. The former fighter, who retired in 2017 with a 64-5 professional record, was hunkered down in Kyiv and ready to resist the invasion from Russian forces, Loeffler said.

“I feel helpless,” said Loeffler, who is based in Los Angeles. “Who would have ever thought we would again see war in Europe? This is something none of us expected.”

Loeffler said he’s been able to remain in communication with both men.

“We’re all just praying they make it through this,” he said. “We all must stand with Ukraine.”

In recent days, Loeffler, who has visited Ukraine dozens of times over the years, said he’s thought back to good times they all shared in Los Angeles.

How all Vitali Klitschko’s children were born at Cedars-Sinai Medical Center in Los Angeles. How they would train by running along Venice Beach. The 2003 heavyweight battle between Vitali and Lennox Lewis at Staples Center. Lewis won after Vitali’s eye had become too severely damaged to continue. Even so, at the time the fight was stopped Vitali was winning on the judges’ scorecards.

Now, Loeffler said, he wants the US to do more to support the Ukrainian people.

“The sanctions must be tougher,” he said. “The world is watching and we must help.”