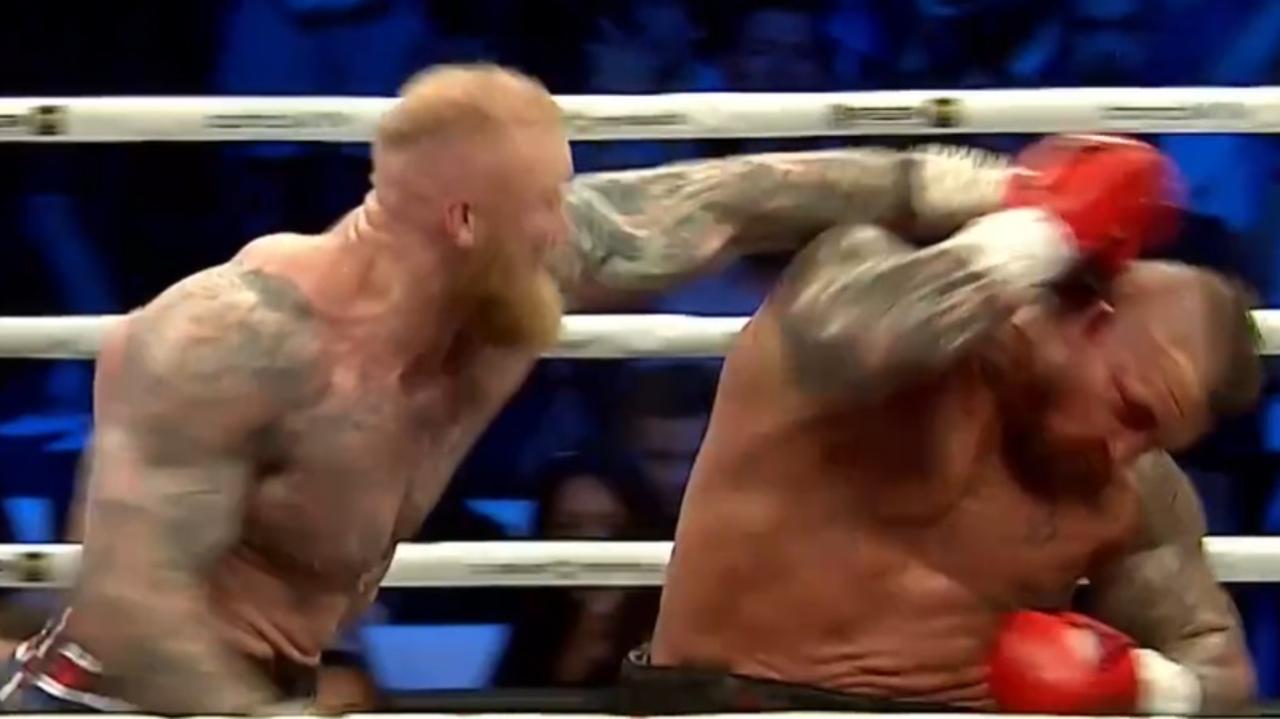 Game of Thrones star Hafthor Bjornsson has made an explosive entry into boxing, leaving his bitter rival beaten bloody.

Both fighters were knocked down by heavy punches, but it was the Game of Thrones star who picked Hall apart with his jab.

The fight was awarded to Bjornsson with all three judges scoring the fight 57-54.

However, there were times when it seemed both fighters were on the verge of stoppage wins.

Bjornsson was awarded two dominant 10-8 rounds where he left Hall lying on his back.

“It feels amazing, I’ve been working my ass off for two years for this,” he said.

“This is for my whole team.”

He also asked the fans during his ringside interview if the fans wanted to see a re-match.

In the first round, Hall landed the shot heavyweights, but when the round ended the cameras showed a nasty cut had been opened above the British fighter’s right eye.

In the second round, Hall dominated as he sent Bjornsson to the floor twice. Bjornsson stumbled into the ropes earlier in the round and then fell backwards again towards the end, giving Hall a dominant 10-8 round.

The fight took a twist in the third round with Thor landing a devastating left hand shot that sent Hall crashing to the floor near the corner of the ropes.

Things settled down in an even fourth round where both fighters exchanged jabs without landing any heavy shots. Hall had come out all guns blazing, but fatigue was clearly settling in early.

Both fighters were out on their feet in the fifth round with the fight slowing down significantly while both tried to keep their arms up. Thor was the most active fighter and was clearly ahead heading into the fifth round.

Bjornsson picked up another knockdown in the sixth round where Hall got back to his feet with blood trickling down his face from several cuts that had opened up.

Hall failed to look for a knockout in the final round and seemed happy just to survive to the final bell.

The fight had been promoted as “The strongest fight in the history of boxing”.

Surprisingly, the crowd was heavily in favor of Hall with chants of “Eddie” echoing around Dubai’s Duty Free Tennis Stadium arena.

The pair have had a bitter rivalry over the years and Bjornsson couldn’t help himself but to antagonize Hall when he broke the Brit’s dead lift world record of 501kg — by just one 1kg.

The rivalry developed from the strongman circuit where the Icelandic giant finished third or better in the World’s Strongest Man competition every year between 2012 and 2019 including winning the title in 2018, a year after Hall beat him in the competition in 2017.

It was the start of the feud as Bjornsson had accused Hall of cheating in the Viking Press portion of the competition.

There was no doubt the pair were serious about the move into the boxing ring.

Hall shared photos of his cut physique in recent times, having shed more than 30kg to reach 163kg in 2020 after tipping the scales previously at 196kg.

While Hall has held onto his size, Bjornsson revealed he had shredded even further than his remarkable physique he shared in December last year.