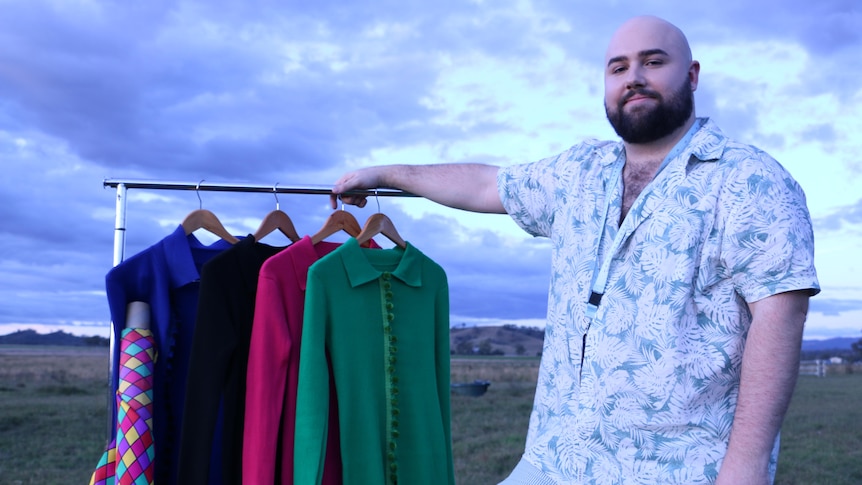 Cameron Robert McCormick is a household name in Manilla, which, admittedly, is a town of only a few thousand.

He is well-known for teaming up with the local leather maker to create heels inspired by Lady Gaga, dressing girls in custom frocks, and using his fashion-forward mother as one of his models.

While not necessarily a thriving fashion hub, with just one clothing store which also doubles as a hardware shop, McCormick still found opportunities to express himself and feed his passion.

“I was always interested in fashion and dressing up, like, I really loved book week at school,” he said.

“There used to be Vogue magazines at the newsagent’s and I think they got in one or two a month and I would be one of the ones who bought it,” he said.

The 26-year-old is broadening his reach after launching his eponymous label.

He moved back home during the pandemic and has used the opportunity to launch his brand which is centred around made-to-order pieces to ensure accessibility and sustainability.

“The country has given me space,” he said.

“I have been able to set up a studio here and I am able to focus a lot more of my time into it because I am not travelling the fast-paced rush of Sydney.”

His homecoming and the launch of his first line have been made even more special by talented childhood friends and a widower who donated a shed full of fabric.

The floral vintage prints in his collection are as authentic as they look.

“It was basically an entire storage shed of fabric because she [the late wife] was a quilter,” he said.

“She had sadly passed away and he thought I would be the best person to have it so I used a lot of her fabrics in my first collection.”

He also enlisted three friends to model, photograph, and provide makeup and a farm location for his collection’s first shoot.

McCormick’s label was woven with the support of his family and his community.

“My biggest fans have kind of been from home you know, they are the ones that have kept tabs on you,” he said.

Meg Wilcher also seized every opportunity to dress up during her school years.

Her favourite form of rebellion during her teenage years in Tamworth was the clothes she wore.

The 28-year-old Melbourne-based fashion designer would pack an extra pair of clothes on mufti-days to put on once she left the family home.

“I think I have always had this inner rebellious side that just hates feeling trapped or conforming,” she said.

“There’s photos of me when I was five and my favourite outfit was a double belt singlet, mini skirt, leopard print, with multiple butterfly clips in my hair.”

Interestingly, the designer did not stick with textiles as a subject despite learning how to sew from her mother who was a textiles teacher.

Wilcher put the decision down to creative differences with teachers.

But the move was an early display of her unwavering commitment to expressing her authentic self which has helped guide her in the world of fashion.

Wilcher’s time with major brands exposed her to the realities of mass production and the damaging effect the industry has on the environment, but it also spurred her on to help create change.

“[I was] being slapped in the face with all of these extreme examples of textile waste creating these garments with a huge footprint that wouldn’t sell,” she said.

“I could use my platform and voice to set an example and standards.”

Wilcher is working towards what she believes should be the norm, bringing her label, Après Studios, entirely onshore to improve sustainability.

But the process has not been easy or cheap, especially when some brands still aren’t getting onboard.

Wilcher is not only considerate of her impact on the environment, but of the people who want to wear her clothes.

“I have a pretty strong gut feeling towards creating things that fit a purpose to begin with, trying to do it as responsibly as possible, but also in a way that is as inclusive as possible,” she said.

She is now balancing ethical fashion with a new vision for her label too, one that put the spotlight on mental health.

“My brand shift is moving a little more towards dressing for your mood and honouring how you feel and checking in on others.”

Grandma’s house to a fashion runway

Elizabeth Murray grew up in Nemingha, just outside of Tamworth, where she learnt to sew at the age of four and went onto complete a highly competitive TAFE fashion course.

The young designer said she found her style during the course, but it was her grandmother’s flare for fashion that first inspired her.

She said her grandmother was “always wearing matching colours, and matching pinks”.

The pair explored styles at op shops, but some of the threads they picked up were deemed a little too loud to debut on the main street and were reserved for her grandmother’s house.

“The Vinnies in Tamworth was insane, it is one of the best op shops ever,” she said.

Thrifting remains a strong part of her personal mission statement as a way of limiting waste, getting creative and not becoming consumed by the lure of a new outfit for every occasion.

“People need to realise that just having a set wardrobe of a few things is fine, you don’t have to have a new outfit every single time,” she said.

Murray is taking a year off after the intensity of finishing her fashion course during the coronavirus pandemic.

When her label is ready to launch, she plans for it to be Australian made to create local jobs and to ensure it does its bit to reduce the industry’s carbon footprint.

But there’s one thing she wants consumers to do now to help the cause to tread more lightly on this planet.

“My brand is definitely going to be about things that you can wear over and over again and if you need something to spice it up … go to the op shop,” she said.