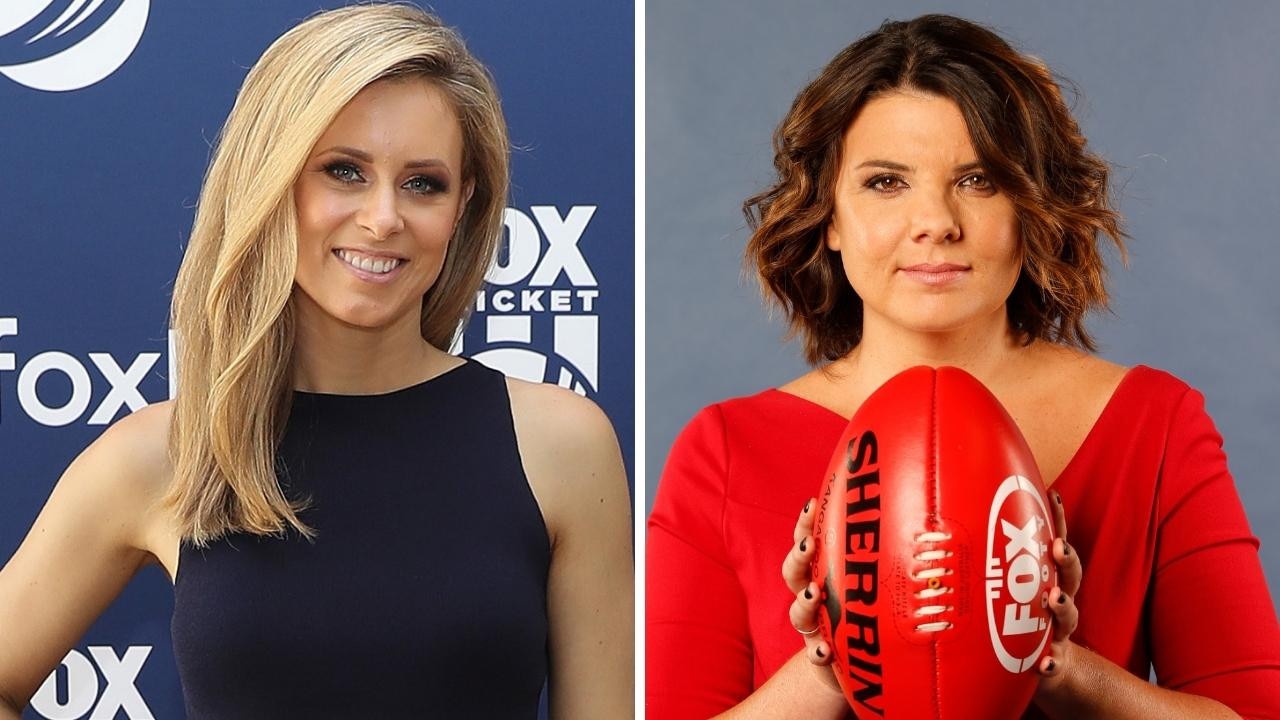 Football presenter Kelli Underwood has gone public to support her friend, who has been dragged into a leaked video scandal.

Star presenter Kelli Underwood has gone public with support for friend Megan Barnard, who was this week dragged into a leaked video scandal.

Underwood made an emotional statement on Sunday calling out what some have described as a sexist culture that exists in some corners of the Australian sports media landscape.

Underwood wrote in a column for codesports.com.aushe “felt sick to my stomach” when Barnard, a friend and colleague, appeared in a leaked video which allegedly showed high profile football journalist Tom Morris making derogatory comments about a female colleague.

Morris was on Friday sacked by Fox Sports, following an investigation.

The reporter had been immediately stood down when videos from a leaked WhatsApp group began spreading across social media.

Morris has made an unconditional apology and released a statement on social media to say he felt “deeply ashamed”.

Underwood, who is a popular commentator and host on Fox Footy, on Sunday said on ABC Opponents she was proud of how her network had responded to the situation.

“I’m obviously employed by Fox Sports, so the fact that they acted swiftly and confidently, that made me proud to be part of that company,” she said.

“And the fact that the network’s biggest star, Garry Lyon, said he wanted to say something to say, ‘This is not OK’. They are significant because they help change the culture.”

She said she was thinking of activists Brittany Higgins and Grace Tame — and the way they have been supported by Australian female political journalists — when she wrote the column for Code Sports where she revealed the real cost of the leaked videos.

She went into detail about her friendship with Barnard and why the video was particularly damaging.

She also replayed a moment when she and Barnard bonded over their sexualities.

“Megan proceeded to tell me that she too was gay and we instantly bonded over how difficult it was to judge whether we should be our true selves in the workplace, because we feared it would jeopardise our careers,” she wrote.

“We’d both done the hard yards and our work meant the world to us. Ever since that taxi ride, we’ve supported each other along the way.

“When I heard the leaked recordings of a colleague discussing Megan’s appearance and private life on social media on Thursday, my heart sank for my friend. I felt sick to my stomach. And I was angry.

“Did the person who leaked that video even think, just once, about the ramifications for Megan and how it would turn her world upside down? And what was this colleague saying about other female journalists?”

Veteran football journalist Caroline Wilson said on Opponents said it was “dreadful” that the person who leaked the videos didn’t consider the impact it would have on Barnard.

“The person who leaked it, what sort of nasty motivation,” she said.

“Did they think about what it was going to do to the woman in question? It’s just dreadful.

“It was devastating. It was shattering. And particularly the comments about the female colleague.

“You wrote a beautiful comment about it, Kel, and how you bonded over your private issues and I’m glad you’re looking after her and talking to her. I’m horrified by the comments Tom made about her.”

Wilson also said it was very welcome to see the decisive action taken by Fox Sports.

Underwood said she has been proud to work for Fox Sports and said the network has a culture of developing and supporting female talents in the sport media industry.

“I’m proud of the way my employer handled this. I can honestly say my gender has never been an issue at Fox Sports and I’ve always felt confident to be my true self,” she said.

“It’s a company that has nurtured female talent. Megan, Mel Jones and Alex Blackwell have excelled covering women’s cricket. Isa Guha shines in the men’s cricket coverage. I often call with an all-female commentary team during the AFLW season.”

“And most important in all of this, there’s an innocent party through no fault of this person, finds herself under enormous pressure and our thoughts are with her tonight.”

Underwood said Barnard will return to active duties for Fox Sports on Tuesday where Australia will play South Africa in the ICC Women’s Cricket World Cup.

Barnard has been in New Zealand covering Australia’s campaign.

“She will continue to excel as a host and face of women’s cricket,” Underwood wrote.

There was widespread support for Underwood’s powerful column from inside the Aussie sporting industry.