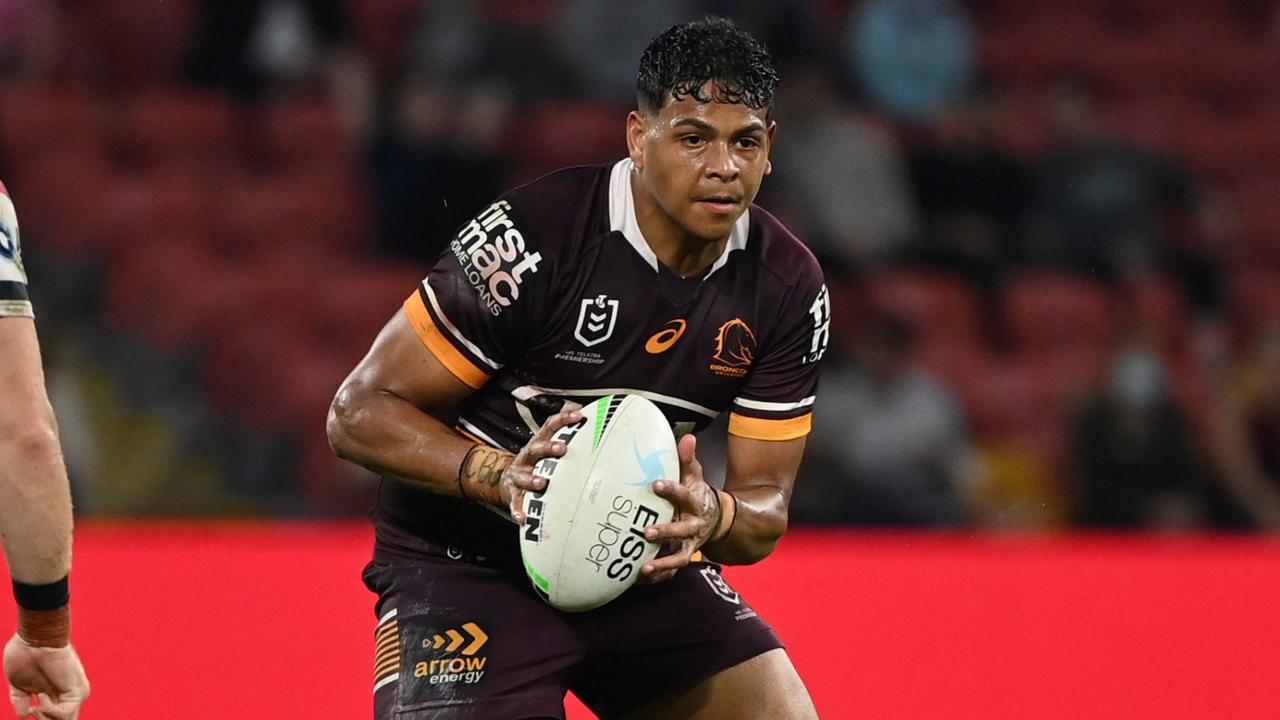 The Broncos are reportedly trying to lock up the services of boom back Selwyn Cobbo on a multi-year extension worth $1 million.

The Eels are chasing a Broncos gun hard as they desperately try to bolster their backline stocks after Haze Dunster’s season-ending injury. But there’s one big hurdle to overcome first.

And he’s not the only player on Brad Arthur’s radar after the Dragons pulled a contract offer to a big-name star.

Meanwhile, the Raiders could add to their list of English imports with reports they have an eye on a Super League stare.

Storm star Jahrome Hughes has hosed down links to the Dolphins after declaring he’s “not looking anywhere else.”

The Courier Mail reported Cobbo’s management is in contract talks with the Broncos over a multi-year extension.

The 19-year-old fullback or winger is currently contracted at Red Hill until the end of the 2023 season, but the Broncos are intent on locking up his services long-term as rival clubs circle.

The Dolphins are set to enter the race for the young flyer’s services and the Broncos don’t want to take any chances that Cobbo could jump ship to their Queensland rivals.

Brisbane legend and current club board member Darren Lockyer revealed the Broncos want to tie Cobbo to the club long before the November 1 deadline when he is free to negotiate with NRL rivals.

“It’s already been mentioned a few times his comparisons to Greg Inglis and Latrell, Selwyn certainly moves like that,” Lockyer said.

“He was school captain before he joined the Broncos, so that shows Selwyn has a good attitude and when you factor in his athleticism and his football awareness, we’re keen to keep him.”

The $1m offer that has been put forward will be for a three-year deal to tie Cobbo to the Broncos until 2026.

In the Broncos’ favor the talented outside back that has played eight NRL games to date and been compared to Greg Inglis and Latrell Mitchell has stated he has no desire to leave the club.

“I grew up supporting the Broncos. I watched them every time they played and I always hoped I could play for them,” Cobbo told News Corp.

“I don’t really care about contracts at other clubs.

“I’m really worried about where I am now and I’m happy at the Broncos.

“Sometimes, passion is more important and I’m passionate about the Broncos and my football here.

“If everything is going well, I wouldn’t mind staying where I am.”

The Broncos deal reportedly could be finalized as early as next month.

The Dragons contract talks with Jack Bird have taken another twist with reports the club has pulled its offer to the former Origin star.

Earlier this week it emerged Bird, off-contract from 2023, was unhappy after being asked to take a “significant pay cut”.

The Daily Telegraph then reported Bird was testing the open market with a meeting with Wayne Bennett at the Dolphin a possibility.

Now the Telegraph reports the Dragons’ new deal for Bird has been rescinded. The club indicated it would be willing to return to the negotiating table but made it clear the money may not be the same when and if they do.

The development has piqued the interest of the Eels who will have money to spend following the departure of some big names at the end of the 2022 season and are looking to bolster their outside backs.

According to the report the Eels have requested they be kept informed of any contract developments with Bird.

The Eels are on the hunt for an outside back to bolster their stocks given Maika Sivo won’t return until mid-season and Haze Dunster is out for the year.

The club was linked to Broncos’ goalkicking back Jamayne Isaako earlier this week as well as Broncos veteran Corey Oates.

Triple M’s Ben Dobbin reported on Wednesday that the Eels are “100 per cent” keen on Isaako and the Broncos “wouldn’t stand in his way.” All that needs to happen now is for a conversation between the two clubs to happen.

The 25-year-old has already signed with the Dolphins from 2023, meaning the Eels deal could only be for the 2022 season.

“What I do know is this, Parramatta 100 per cent would love Jamayne Isaako, they want him to join the club immediately,” Dobbin said on Triple M.

“They will deny, they will say whatever they want, but they want Jamayne Isaako for this one year.

“The Broncos have not been approached by Parramatta or his management as yet. They have not had a conversation.

“I’ve spoken to Broncos officials who have said, clearly they won’t give him away, but if they (Parramatta) want to pick up his contract the Broncos would let him go. They wouldn’t stand in his way.”

However, it may not be an easy feat for the Eels with Dobbin also revealing a move to Sydney “is not that appealing” for Isaako as he and his family are settled in Queensland.

“I do know that Isaako wants to stay here (in Brisbane) because of his family,” he said.

“He’s here, his family is here, his wife is here. The thought of moving to Sydney is not that appealing.”

BACK FROM BRINK: How Gus helped save luckless Dogs enforcer from injury disaster

‘HAVE A SIDE IN MY HEAD’: Kevvie opens up on Broncos’ key selection battles

The Raiders are interested in English Super League star, Will Pryce, withNewsCorp reporting the club has made contact with the 19-year-old’s father, former English international, Leon.

Pryce, who can play five-eighth and fullback, made his Super League debut for Huddersfield last year and went on to play a total of 13 games.

It’s understood Pryce has two more years to go on his Huddersfield contract after signing an extension last year.

However, News Corp reports the Raiders would be prepared to pay a transfer fee to get the young gun to the nation’s capital.

It comes after it was revealed several clubs will be keeping a close eye on the upcoming Rugby League World Cup to potentially sign English players.

Furner confirmed a group of officials will make the trip to the UK later this year on a fact-finding tour.

“We have a desire to go over to England,” Furner said.

“We try to go overseas every four or five years to freshen up the staff and coaches.

“We would check out the World Cup, scout for young players and also see what is happening over there in the world of sport. We don’t go every year.”

Storm star Jahrome Hughes has hosed down reports linking him to a big-money move to the Dolphins, declaring on Wednesday that he’s “not looking anywhere else at the moment.”

The gun halfback also admitted the decision made by three of his teammates to sign with the expansion club is “disappointing” — but he can understand why they did it.

Hughes is contracted to the Storm until the end of 2023 and will become a free agent from November 1 after choosing to not activate the option in his favor for 2024.

The 27-year-old knocked back the option in a bid to chase a six-year, $5 million deal with the Storm.

However opening himself up to NRL free agency from November 1 will allow Dolphins coach Wayne Bennett to swoop in with an offer for the New Zealand international for the club’s second season in 2024.

Speaking to the media on Wednesday, Hughes admitted the Dolphins are “a better fit” for the trio given their ages (32, 30 and 29 respectively), but reaffirmed that he’s happy at the Storm.

“It’s disappointing — we’re losing a few players to the new franchise but for them, at this time of their career, it’s a better fit for them,” he said

“But for me, with two more years of my contract, I’m not looking anywhere else at the moment.

“There is some contract stuff being brought up … that’s still so long away and to even be looking at that is quite silly for myself.

“Being here for a couple of years now, turning into a senior player and leader here, I don’t want to go anywhere.

“I’m happy and my family’s happy here, I’m trying to stay as long as I can.”