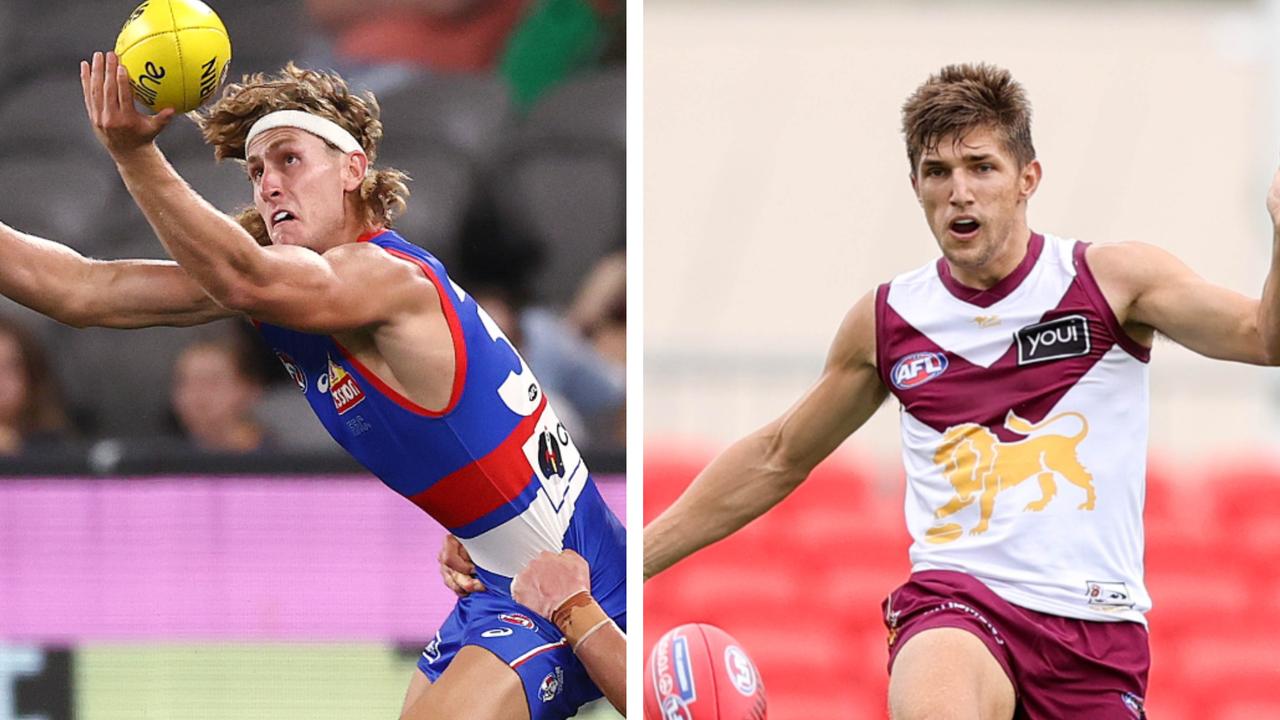 The Brisbane Lions have edged out the Western Bulldogs in a thrilling and physical pre-season clash at Marvel Stadium.

You could be forgiven for mistakening it for a regular season match at times it had that much heat.

Such was the injury toll suffered on the night as the intensity of the game came at a cost, with Alex Keath, Deven Roberton, Keidean Coleman and James Madden all suffering injury concerns.

Meanwhile, Lachie Neale was back to his brilliant best for the Lions, gathering 30 disposals and booting two goals, while Zac Bailey (18 disposals, two goals) was lively all night.

Naughton took a huge contested grab inside 50 in the first minute of the game and kicked truly for the opening goal.

Brisbane responded nearly instantly the other way with a fast break goal finished by Robertson to ignite an electric start from both teams that brought plenty of heat.

There were several more near huge massive marks in the first quarter, with Joe Daniher and Lincoln McCarthy flying high for marks in an enthralling contest for a practice match.

Naughton kicked his second goal late in the corner after taking another huge mark across the goals.

Nakia Cockatoo continued the exciting play, finishing a goal through traffic for the first major of the second term, followed by a huge long-range bomb from Daniel Rich as the Lions took momentum.

Coleman’s move to half back was proving a profitable move by Chris Fagan, with the youngster racking up heaps of ball ball and using it effectively.

Unfortunately, injury concerns struck both teams midway through the second quarter, with Keath coming from the field after suffering knock to his lower leg, while Coleman hurt his hamstring.

Keath was later seen running up and down the boundary line before returning to the field as Dogs fans would’ve breathed a huge sigh of relief. However he was ruled out for the remainder of the night from early in the third term.

While it’s likely more precautionary more than anything some 12 days out from the Dogs’ Round 1 clash against Melbourne, it’s less than ideal for Luke Beveridge’s side on the eve of the season.

Coleman was seen on the bench with ice on his hamstring, signaling the end of his night.

“That’s unfortunate, we’d just spoken about how important he was to this bad six,” King said of Coleman.

Naughton took another huge, albeit dubious, mark to close out the first half, but he wasn’t able to convert the set shot after the siren.

Naughton booted his third goal from the game after taking another huge mark deep inside 50 to finish a strong Bulldogs play.

“A lot of people have compared this guy to Wayne Carey and I see little things in his game,” King said.

“The hardest thing as a forward is to get separation from his opponent. He gets that in the first two to three steps, such is his power.”

Russell added: “The writing is on the wall for a big season from Aaron Naughton.”

Bailey closed out the third quarter in thrilling fashion, booting a crafty goal — his second for the term — from outside 50 that sailed through after the siren.

“All class, look out for a big 2022. He might be in for the biggest of big seasons. He mesmerized them,” Russell said.

The Dogs fought back hard in the fourth quarter and got within a kick, but ultimately just came up short in the end.

Aaron Naughton is quite simply a monster in the contest.

At times to the detriment of his own health, no player in the competition launches themselves harder at the ball, or crashes packs harder in flight.

He was at his brilliant best in this one, prompting North Melbourne legend to draw parallels to his legendary ex-teammate Wayne Carey, arguably the greatest forward of all time.

“A lot of people have compared this guy to Wayne Carey and I see little things in his game. The hardest thing as a forward is to get separation from his opponent. He gets that in the first two to three steps, such is his power,” King said.

Naughton has even more important role to play for the Dogs than ever before this season, with Josh Bruce (ACL) set to miss most off this season and Jamarra Ugle-Hagan not quite yet up to AFL speed.

King went so far to label him the Dogs’ most important player ahead of Marcus Bontempelli.

“This is the man who’s the most important Dog in my eyes,” King said.

“I know there’s a lot made of Marcus Bontemeplli, but without Josh Bruce the first half of the year, Jamarra Ugle-Hagan still finding his way, this man needs to kick 50 plus goals, it’s the bare minimum.”

Indeed, the 2022 season looms large for Naughton to potentially hold the key to the Dogs’ flag hopes.

One thing’s for sure, they won’t come up short by a lack of his efforts.

Zac Bailey pulled out all his usual tricks.

His brilliance was particularly on show in the second quarter, kicking two crucial goals to cap off seven score involvements at the time – the equal most on the field.

“All class, look out for a big 2022. He might be in for the biggest of big seasons. He mesmerized them,” Russell.

Touted to play more midfield time in 2022, a performance like tonight poses the question over whether he’s best served in his usual role playing predominately as a forward.

“We’re talking about impact rather than accumulation. Would you rather a 15 disposal, 7-8 score involvement game or a 30-plus disposal game, from a player liker Bailey. Where do you use him? That’s the arm wrestle that’s going on with Fagan and his coaching crew at the moment,” King posed.

“How long does he spend in the midfield as opposed to forward? Tonight, he’s been involved in seven Lions scores, the equal most on the field. It’s maximum impact.

Russell responded: “So Cyril Rioli theory is what you’re giving me?”

It’s certainly a dilemma for Fagan. On one hand, he’ll want to continue to evolve his midfield and team at large and develop players.

But is Bailey going into the midfield and racking up 30 disposals necessarily what’s best for his career and the Lions? Or is he simply most damaging forward of center?

With teammate Cam Rayner also set to spend more time in the midfield in 2022, it’ll be an interesting situation to watch Fagan manage.

1. LIONS HAVE A POINT TO PROVE

Brisbane’s 2021 season ended in heartbreaking fashion in a one-point semi-final loss to the Bulldogs.

But Chris Fagan’s men have returned with a point to prove after flexing their muscles in this pre-season rematch.

It was a tough, frantic opening term where neither team could get momentum. But it was clear that both sides weren’t holding back.

Then after it looked like the Dogs were gaining momentum in the second term, Brisbane charged ahead, kicking two six goals behind the dominance of midfield, particularly Hugh McCluggage, Lachie Neale and Jarrod Berry.

Berry’s strong form is particularly welcomed after an injury-cruelty 2021 season.

“You see the ability for the Lions to just shut them down. That frontal pressure we talk about a lot, you can see it’s the leaders of the Lions, it’s Neale and McCluggage getting involved,” King said on Fox Footy at half-time.

“Then they broke them down and once they did that, if you can get in quickly against the Dogs, you can score quite easily.”

It was the efforts of a club that were ready for Round 1 that will attack the season with full strength.

Of course, the Lions have a 1-5 finals record under Fagan despite top four finishes in each of the last three seasons.

And they have something of a glitter in their eye of trying to go one step further this season.

“It was the Lions midfielders that got to work and as a flow on effect, their defense looked better,” Saints great Nick Dal Santo told Fox Footy.

“A little bit more stable behind the football, someone like a Daniel Rich is able to play his style of game.”

If they learned anything tonight, it’s that they can match it with the best.

Re-live Western Bulldogs v Brisbane in our live blog below!